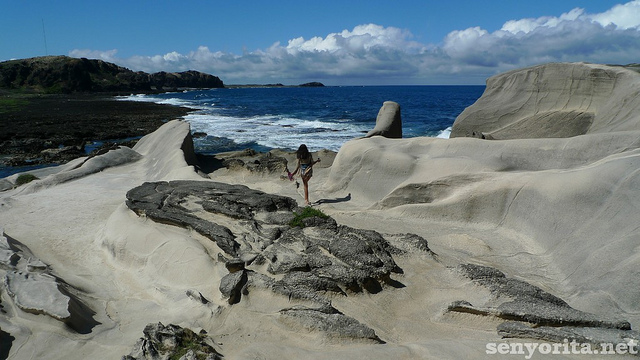 If Laoag City and Paoay are famous for its Marcos-related sites and other historical spots, Pagudpud and its nearby towns Bangui and Burgos are known for its tourist attractions that will make every traveler fall in love with it.

My interest in exploring Pagudpud started when I found out that Assunta de Rossi’s FHM Philippines calendar shoot in 2001 was done there. Yes, I am a big Assunta de Rossi fan and I’m proud of it. Aside from the tasteful shots, the scenery made every photo of hers extra sensual.

Jason and I stayed at Evangeline Beach Resort, where we had a romantic dinner upon arrival (will write about this soon!). We decided to take the Tricycle Tour as suggested by one of the staff members. For Php 1,200, we can explore the different tourist spots indicated in a laminated ‘menu’ (pa-order, please? LOL). We figured out that almost all of the destinations we had in mind are included in the package so yeah, Tricycle Tour it is!

Our first stop is the impressive Bangui Windmills. I kept on saying ‘Wow!’ when I saw it from afar. It is the very first ‘Wind Farm’ in Southeast Asia and the project was initiated by Ferdinand Marcos Jr. sometime in the 1990’s due to the poor quality of power provided by the NAPOCOR in the area. When we arrived in the main site, the inner child in me got excited.

‘There’s a bunch of giant electric fans in here! Weeee!’ I shouted. It was a hot morning, but the cool breeze of the South China Sea made up for it.

Since I am already in Bangui area, I asked Kuya Joseph (the tricycle driver) if he can bring us to the controversial Kangkang Windmill Cafe. I remember laughing too hard upon watching Ramon Bautista’s KangKang Cafe moment. Must go there!

Kangkang Windmill Cafe is located just five minutes away by tricycle from the main drop point of Bangui Windmills. Upon arrival, I asked the staff if Manang Imelda is there. They laughed and asked me if I saw the video with Ramon. In that video, Ramon ordered the Kabatiti, Utong and Puki-Puki. Only the latter is available that morning and we’re not yet in the mood for early lunch. Jason and I decided to just order a good drink.

Let’s get romantic this time! Our next destination is the Cape Bojeador, also known as the Burgos Lighthouse.

It was built during the Spanish regime that aims to illuminate the place. It reminds me of the Bolinao Lighthouse, although this one has a more rustic feel.

My favorite part destination in this tour is the Kapurpurawan White Rock Formation. Kapurpurawan is an Ilocano term which means ‘whiteness’. The road towards this wonderful spot is a tricky one that we ended up hitting our heads at the roof of the tricycle LOL.

The tough journey is worth taking since the Kapurpurawan White Rock Formation didn’t disappoint us. We ended up staying for almost an hour since we were the only visitors that time. We took a lot of wacky photos and just enjoyed the scenery. It reminded me of the music videos of Emma Bunton (Take My Breath Away) and Geri Halliwell (Mi Chico Latino).

What a hectic morning! Our itinerary points out that our next destination is the Kabigan Falls, but we decided to just skip that part. We were already tired and hungry. We still need to trek for a few more minutes before we reach the hidden waterfalls. I want food 0_0

We just arrived in the Blue Lagoon area on time. For our lunch, we opted to consult one of the local ‘paluto’ stalls, where Jason, Kuya Joseph and I ate our late lunch. The sky became gloomy and it started to rain. Buti na lang kumakain pa lang kami LOL.

Jason is such a beach boy so we went to the more quite part of Blue Lagoon Beach. While Jason is busy playing at the beach, I started recording short clips and took some pictures.

For our last stop, we went to the famous Patapat Bridge. The view is breathtaking up to the point that I want to grab someone and ask him to propose to me LOL.

The blue sea, the strong waves, the well-structured bridge, the surrounding mountains, the birds – PERFECT!

There are other spots that we could’ve visited, but opted not to because of the weather. It’s better to be safe than sorry =P

I enjoyed our Pagudpud Ilocos Norte Tricycle Tour! Aside from the fact that we explored some of Ilocandia’s best spots, spending it with a new friend who is fun to be with made it more special (yes that’s you, Jason!).