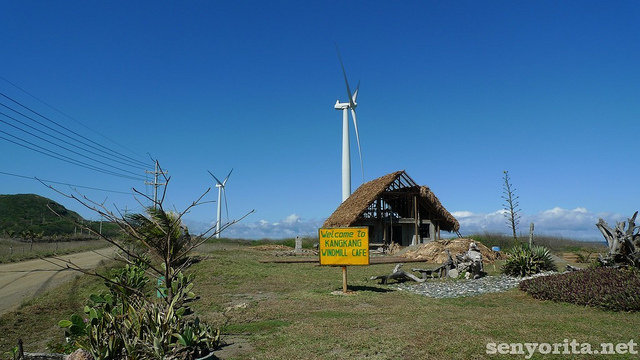 The Bangui Windmills is one of Ilocos Norte’s spots that attracts a lot of tourist and at the same time helps its residents in terms of electricity and other environmental concerns. I was blown away with the story behind the project.

Jason and I took pictures immediately when we finally reached the area. We saw some locals who were making some souvenir items. I wanted to buy one and bring home a mini Bangui Windmill pen holder with me, but I didn’t bring enough money for it. Too bad.

We asked Kuya Joseph, the tricycle driver/guide for the day if he can take us to the Kangkang Windmill Cafe. The Ramon Bautista viral video is the reason why I got curious about this place.

The Kangkang Windmill Cafe is just 5 minutes away by tricycle from the main drop-off point to Bangui Windmills. Arriving in the location made me feel like I’m in a desert somewhere in the Middle East.

We were the only guests that morning. The two friendly staff were all smiles when we entered. I wanted to apologize as they were busy watching the Piolo Pascual – Regine Velasquez starter ‘Paano Kita Iibigin?’ via Cinema One. Instead of placing my order, I asked them if ‘Manang Imelda’ is around. She is the staff whom Ramon Bautista interviewed in his famous Ilocos video. Since it was too early for lunch, we decided to just get something to drink. We ordered the Iced Kangkang Brew from Kalinga/Sagada.

Drinking a cold coffee in this place is a big relief. We stayed for a few minutes and took the opportunity to interview Kuya Joseph. Just like most Ilocanos I talked to, he is also a Marcos believer. He even narrated that he witnessed on how Pres. Ferdinand Marcos helped his relatives before. He mentioned that they’re approachable. He is also happy with how Ilocos Norte is taking the tourism business seriously.

I also asked him about his life as a Tricycle Driver and Tour Guide. He is not an official employee of the resort where we’re staying so he’d do the usual tricycle rounds if no one contacts him for a day tour. I assume that the tricycle drivers who are actively doing day tours have a fixed rate since they have this laminated menu, where the list of tourist spots are written. I am not sure if their business is as easy as finding car hire in Menorca online is. Since he was nice to us, I will update this post soon with his contact details for the sake of those who are planning to do a Pagudpud Ilocos Norte Tricycle Tour 😀

So.. would I recommend a Kangkang Windmill Cafe stopover? I have to say yes especially if you want to quench your thirst from the heat of the sun. I love the Iced Kangkang Brew. The staff also mentioned that Coco Martin and Julia Montes visited a few weeks before to shoot some scenes for their current teleserye entitled ‘Walang Hanggan’.