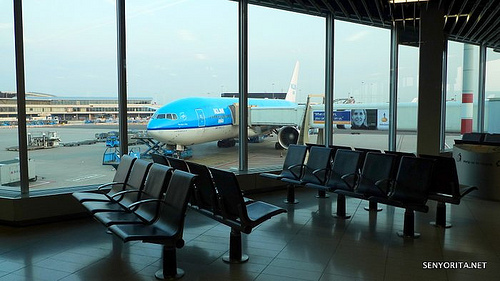 I’ve been staying for more than a week now here in England. It feels really great to be reunited with my family once again!

In 2010, I took the Manila-Dubai-Birmingham flight of Emirates Airlines. This time, I booked via KLM. Aside from the fact that it is cheaper, I am also eager to ride in the Dutch-operated airline company.

I booked the flight last minute, but was able to register to the Flying Blue. Go for miles! I also took the opportunity to do online check-in 30 hours before the flight. Chose a seat in advance for convenience.

When I arrived at NAIA-1, the airport is congested with a lot of passengers. Lucky for me, the line of KLM Online-Check-in is not that long that’s why I was able to pay the airport tax and pass through the immigration. The airport really needs improvement.

I went straight to KLM’s Boarding Area. Preoccupied with answering messages, the Boeing-777 aircraft arrived much to the delight of the young passengers waiting. We were informed of a short layover in Taipei for one hour. During the short flight to Taiwan, we were given the first set of meals. Hurray for dinner! Deplaning and going back to the aircraft for Amsterdam, we were once again given snacks to indulge to. More! I scanned through the multimedia device for the list of movies. I was more than happy to see the â€˜Searching for Sugar Man’ on the selection! It is a documentary about the singer named Sixto Rodriguez. I’ve been looking for a copy of that movie and I had plans of getting a DVD copy. The movie inspired me to continue â€˜wandering’.

The flight was full and I had the option to move to the â€˜Economy Comfort’ area for an extra fee. I didn’t take it and for 12 hours, I was stuck in the window seat. I only managed to go to the toilet once. I sat there, getting all the snacks they offered, tried to sleep, listened to music and read some articles in the inflight magazine. Yeah, it was a pretty productive 12hour flight. Add the fact that my seatmate narrated a number of interesting stories. When we arrived at the Amsterdam Airport Schiphol at 6AM. It was lovely to see the sun rise (Euro edition toinks). This is a start of a new beginning ofâ€¦ I stayed in the airport for 3 Â½ hours. I was able to access free wifi connection which was good for 30 minutes. Instead of looking for a place where I can get a cup of coffee or snacks, I chose to take a nap in one of the vacant seats near my boarding gate. For the Amsterdam-Birmingham flight, we rode the 32SÂ aircraft. The duration of the flight is 50 minutes. We left sunny Amsterdam to be welcomed by a chilly Birmingham. Hello, open shoes!

After passing through the immigration area, I went straight to the luggage area. Happy to see my mom and Kuya Pete waiting outside.

My mother’s embrace automatically gives me that warm feeling of being at home. 🙂