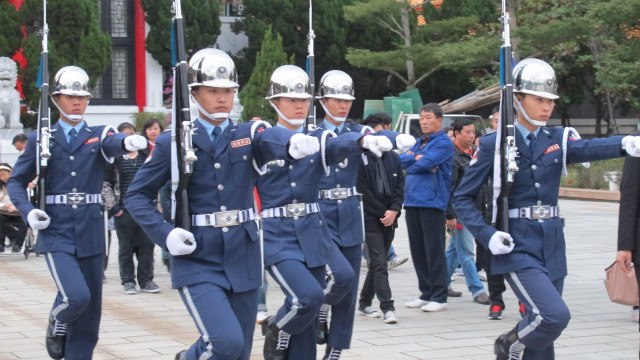 I saw Johnny (our tour guide) raising his blue flag outside Taipei 101 right after the tour to one of the tallest buildings in the world. He informed the group that we have to hurry up so we can catch the last scheduled Changing of the Guards ceremony at the National Revolutionary Martyrs’ Shrine or simply â€˜Martyrs’ Shrine‘. Like in our previous stops, the tour guides showed some interesting clips related to our next destination.Â  The National Revolutionary Martyrs’ Shrine was built in 1969 in Taipei City. It is considered as a solemn place dedicated to the soldiers who fought and died in the Republic of China during the Xinhai Revolution,Northern Expedition,Â Second Sino-Japanese War,Â Chinese Civil War, and theÂ FirstÂ andSecond Taiwan Strait Crises. The location of the Martyrs’ Shrine is in Taipei City, but most of the soldiers who sadly passed away during the previous wars were from China. I can say that we’re a lucky bunch because we made it just in time for the last Changing of the Guards ceremony. My camera is not as tough as these soldiers and it gave up due to the cold weather. I’m glad my companions were armed with the best weapon for bloggers â€“ CAMERAS!

I personally like the uniform of the guards on duty. According to Cebrina (one of our tour guides), male Taiwanese citizens are required to serve in the military once they reach a certain age. Some plot their own escape plans (like studying abroad or getting sick) so they won’t be forced by the government to do their military obligations. I think a new law was released recently that those who were born from 1994 onwards are no longer required to serve for the Taiwanese government. Tall Taiwanese men in black were in-charge of the crowd control. They made sure that the visitors won’t interfere with the ceremonial rites. Most were taking pictures and recording video as I observe every movement. Standing that long in your post is not easy. I wonder what do they usually think about to keep up with their responsibility for the day? It is a good way of paying tribute to the martyrs of the past. We should be thankful that the present is not as chaotic as it used to be. Visitors of all ages were mimicking the guards when the ceremony ended. It is normal to copy the march, but we did something that I am not really proud of. I felt embarrassed and sorry for what we did. Just remember to be proper when visiting important places such as shrines and temples. Lesson learned. Tsk. We left the National Revolutionary Martyrs’ Shrine with a mixed emotions and high respect not only for the Taiwanese and Chinese martyrs, but also for every war veteran from all over the world who did everything to defend their respective countries.

Have you been to the National Revolutionary Martyrs Shrine in Taipei City, or have you witnessed a Changing of the Guards ceremony? What are your sentiments when visiting such important shrine?