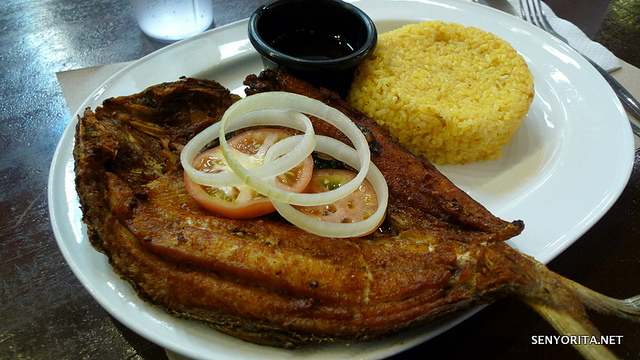 It is not my first time to write about Panaderia Antonio Bakery and Restaurant. I guess it is obvious that I consider it as one of my favorite restaurants in Pangasinan. It is already a ritual of mine to bring either my friends or grandparents whenever I’m in my beloved province.

Despite the heavy rainfall, Doc Wends, Darwin and I took a tricycle ride from Dagupan to Calasiao just to eat dinner there. Doc Wends, who is originally from Pagadian is a first-timer in Pangasinan. That day, he went to Manaoag, San Jacinto and Calasiao to explore, take pictures and get to know Central Pangasinan more. As a Dagupena, I don’t want him to leave my city without tasting the Bonuan Boneless Bangus. It’s Darwin’s nth time in Pangasinan and he was eager to eat once more in Panaderia Antonio Bakery & Restaurant, which was formerly known as the Plato Wraps Restaurant.

The building where the restaurant stands was repainted early this year. In 2005, they decided to open a restaurant since Mrs. Kamela Seen can really cook well. In fact, she used to do part-time catering in the early 90’s.

You want milk tea? They have it too! Moji Milk Tea is the newest baby of Panaderia Antonio Food Corp. As of writing, Moji Milk Tea is being sold in the restaurant and at Robinson’s Calasiao. I am keeping my fingers crossed that they will soon branch out to milk tea carts nationwide just like Plato Wraps. Imma get a franchise just in case!

Later on, Kreme Seen joined us. With the way they reacted after the first bite, it seems like my blogger friends loved the Bonuan Boneless Bangus. On my part, I ordered the Kare-Kare with bagoong. I missed it! Just a few days ago, they celebrated the long weekend with a Pizza-All-You-Can treat. Unfortunately, I wasn’t able to go. I haven’t tasted their new pizza set menu yet. 😐

If you happen to pass by Calasiao, Pangasinan, don’t forget to stop by and eat at Panaderia Antonio Bakery and Restaurant. They also have a branch inside CB Mall in Urdaneta City.