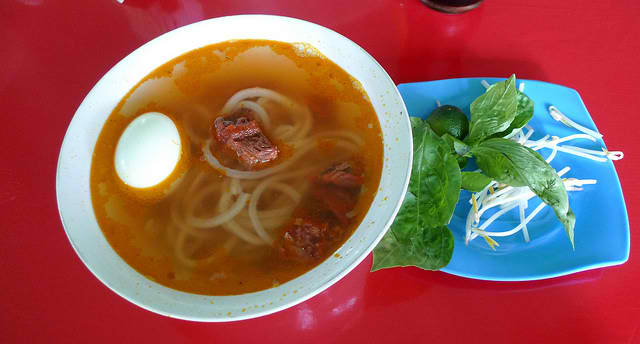 For the 4th time in three years, I set my foot once more in Puerto Princesa, Palawan. No, I didn’t visit the famous Underground River and didn’t book a Honda Bay Tour trip. I am only scheduled to stay overnight before I take the van trip to El Nido, Palawan.

It is my first time to visit Puerto Princesa on my own. It is also my first time to fly via Clark (will write about it on a separate post). I left the Clark airport with a gloomy weather, but things starts to lighten up when the plane landed at the Puerto Princesa Airport on a sunny afternoon. It felt like the Goddess of the Clouds is telling me not to worry and I’ll be fine.

Hungry passenger is hungry. I went straight to a nearby Chao Long place for lunch. I ordered Chao Long Beef Stew with Egg. There, I had the opportunity to talk to Kuya Bogs, the tricycle driver. I invited him for lunch because I just want to. We exchanged stories about Palawan’s booming tourism. I also met an ex-resident who went there to visit his kids. After lunch, I went straight to a new hotel near the capitol building to recharge by sleeping.

I woke up at 7:30PM. Unfortunately, the wifi connection in the said hotel is broken so I went to a nearby pizza place so I can check my online accounts.

I woke up early the next day. I ate breakfast at the nearest Jollibee branch as the van to El Nido leaves at 7AM. I am the only solo female traveler in that trip. There’s a Polish family, a Filipino couple in their 30’s, two friends from the Middle East and a male balikbayan. I wanted to sleep, but I just couldn’t.

We had a short stopover in an eatery in Roxas. The checkpoint where they asked the passengers if they have mango seedlings with them left me puzzled. I found out that bringing in fruits or seedlings from the Southern part of Palawan is not allowed due to the Malaria scare.

I remember feeling ecstatic when I finally saw a sign with ‘El Nido’ on it. I thought we’re almost there. We had to endure a slippery trip to the town proper for almost an hour. I’m just glad that the scenery teased me and made me excited to see on how the paradise from behind looks like.

We were dropped at the Fort Wally van station and I took a tricycle ride to The Alternative Inn. Now I know that the tiring trip is worth it upon checking the view:

Yes, I am finally in El Nido! I am ready to be captivated by the beauty of El Nido!

I spent the afternoon walking around the beachfront and went back immediately to The Alternative to rest a bit. I also tried the Banana Hart, which is the best-seller of The Alternative Inn’s Restaurant for dinner. While online, I found out that fellow travel Dominic is also in El Nido. I sent him a message and before I knew it, he’s already there!

It is nice to know that a fello travel blogger is within the area (Pinoy Travel Bloggers are everywhere! 😛 ). It is his last night in El Nido. He told me that he was only able to take a mixed tour that day. Apparently, the waves were too strong in the previous days. I found out that he is also Ilocano yey 😀 We exchanged travel stories and had to call it a night. He is scheduled to leave El Nido at 5AM to catch the trip back to Manila in Puerto Princesa.

I went back to my room to do more online tasks. I love hearing the waves from my room. Isn’t that relaxing? The sound of the waves somewhat pushed me to sleep and rest. I love it. This is a vacation!

Have you been to El Nido? How was your trip like from Puerto Princesa?Â
***