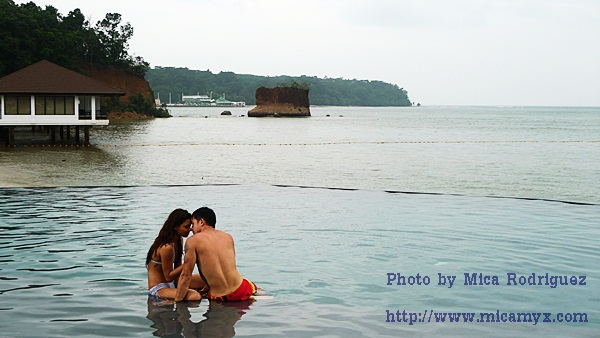 Travel Photo of the Week: Like a Movie Scene | Subic, Philippines

In the sweetest dream

I have pictured us together..” – Jennifer Lopez, Waiting for Tonight

Here’s a snapshot of Filipino actors Dennis Trillo and Lovi Poe during the shoot of the movie ‘My Neighbor’s Wife’ at Kamana Sanctuary Resort & Spa in Subic, Zambales. In the said movie which was released last year, Dennis and Lovi played the roles of Aaron and Giselle respectively. At the start of the film, you will pity Aaron and despise Giselle. Eventually, you will feel rage against Aaron and want to give Giselle a hug.

Did you know that Dennis Trillo and Lovi Poe garnered nominations from several award-giving bodies in the Philippines because of this movie? Some moviegoers opted to watch the other sexy-drama flick ‘No Other Woman’ (Starring Anne Curtis, Derek Ramsay & Cristine Reyes), but I can say that story and acting-wise, this film is better. Carla Abellana and Jake Cuenca also bestowed their acting skills for this movie. I just hope that Regal Films won’t stop in producing movies such as this one.

This part of the movie is supposedly one of the ‘reminiscing sequence’ of Aaron when Giselle ‘cheated’ on him. Jun Lana, the director of the movie asked them to kiss on this part and they did it without hesitation. I was waiting for this part on the movie’s final cut, but they didn’t include it. The two stars laughed after the director shouted ‘Cut!’.

Why did I choose this as the Travel Photo of the Week? I am thinking of possible cheap holidays in spain since a good friend of mine is getting married this week! Also, Dennis Trillo just celebrated his 31st birthday a few days ago meaning he is a certified Taurus (like me!)

Dennis Trillo is set to appear in the upcoming comedy movie ‘Boy Pick-Up The Movie’ with Ogie Alcasid, Solenn Heussaff, Sarah Lahbati and the rest of the Bubble Gang cast scheduled to be shown on June 6. Lovi Poe just finished her indie film with Nora Aunor entitled ‘Thy Womb‘ and is set to do a drama film with Paulo Avelino and Jennylyn Mercado and another movie with Kapamilya’s Enrique Gil. Goodluck to my two favorite Kapuso and Regal stars!