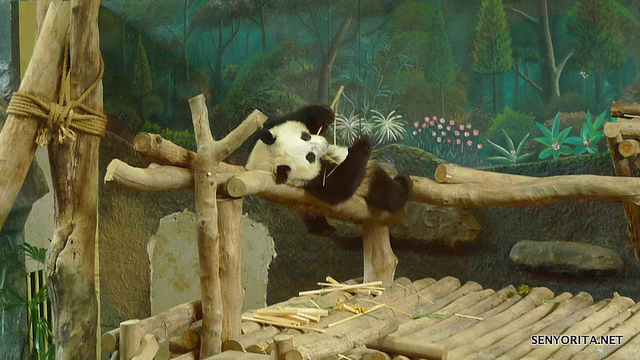 PANDAS. Don’t you find them cute? When I found out that three Pandas are staying in the Chiang Mai Zoo, I got excited and I wanted to see them immediately. There are only over 34 existing Pandas around the world today and I’m happy that three are found in Chiang Mai.

Upon arrival to the zoo, I saw the signage saying that we need to pay extra 100 Baht to see the three cuties. I didn’t mind paying extra since I can see the need to handle these oddly cute creatures with care. Drama? LOL.

First, let me introduce you to the expat Panda Family (originally from China) that is currently based in Chiang Mai: Chuang Chuang, Lun Hui and Lin Ping.

Are you ready to meet the Pandas? Let’s go! MEET LIN PING – He is the ‘baby’ of Chuang Chuang and Lin Hui.

LIN PING was born on May 27, 2009 in Chiang Mai Zoo. He is Gemini hihihi. When I arrived, several kids were taking pictures and videos of him as he eats bamboo sticks the lazy way. You can really see that he is a ‘Baby Panda’. I think he owns the biggest room where he can freely play. I think only Pandas can project a lazy image yet you’d find them cute than annoying 😛

MEET CHUANG CHUANG – He is an expat panda from Wolong, China. Born on August 6, 2000, he lives in the Chiang Mai Zoo since October 12, 2003. I also think he is the laziest among the three since he was sleeping when we went there. Or maybe he is not in the mood to entertain tourists? Oh wait.. we went during their siesta time hehe. MEET LUN HUI – Last but not the least, I present to you Lun Hui! He is my most favorite among the three because he is not as lazy as the two (but still lazy LOL). Lin Hui is a native of Holong, China born on September 28, 2001. He migrated to the Chiang Mai Zoo on October 12, 2003.

He kept on walking when we arrived much to the delight of the crowd. There was this instance wherein he even posed for the cameras. He kept on rolling over in the upper right portion of his crib. So cute!

Most of the visitors were fascinated with Lun Hui’s roll over antics! It’s a routine to him – Walk, Pose, Walk, Rollover. What a bum life, eh? According to a Chinese friend, only the Pandas are passable as cute lazy creatures hehe 😀

My short stay in Chiang Mai Zoo made me feel like a kid again. My childhood dream to see a Panda came true.Too bad I can’t take one with me back in Manila. The three cute Pandas truly made my Chiang Mai trip more special. Weeee!

Have you seen a Panda in real life? How was it?