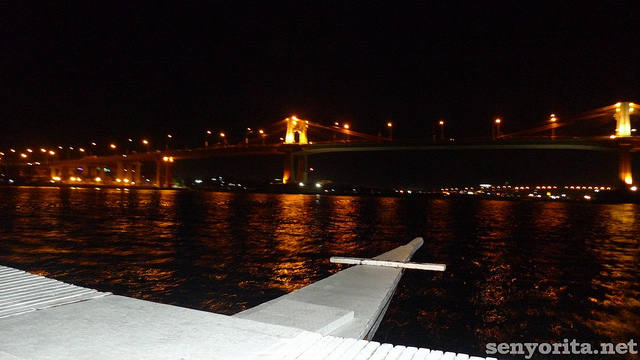 When in Cebu, I suggest that you try Islands Banca Cruises’ Sunset Chill-Out Cruise! It is one of our coolest discoveries from our recent Cebu trip and it is a perfect way to escape from the hustling traffic noise of Cebu City.

Together with my travel buddies Enrico and Edcel, we took a cab to Cebu Yacht Club from IT Park to catch the 5:30PM schedule. When we arrived, we saw a lovely couple from Ilo-ilo. Islands Banca Cruises launched this tour in late 2010 and so far, they’re receiving good reviews.

We took some kulit shots while waiting for the banca. Isn’t it obvious that we’re excited?!

When the banca finally arrived, some chill-out songs are being played. Â I think we started out a few minutes late, but it’s ok. I know that we will have a good night cruise!

We were welcomed by Sir Jeff of the Marketing Department of Islands Banca Cruises. The staff were all smiles to us and they instantly served drinks when the cruise started. They gave out some snacks too.

The cool breeze, the lounge music and the relaxing ambiance made me really happy. I guess we’re lucky that the weather is great and the mood is just perfect for intimate talks and romantic moments. If only…

Through the cruise, we passed by the Liloan lighthouse, Marcelo Fernan Bridge, Mactan-Mandaue Bridge, Cebu City skyline. It is our first time to cruise along Mactan Channel at night and I can’t believe how magical that moment was.

It is nice to see the Mactan-Mandaue Bridge and Marcelo Fernan Bridge at night especially with the lights. Parang wala ako sa Pilipinas. I remember when we went under the bridges of River Thames during my London Eye River Cruise adventure last February (another backlog 0_0). Doing cruises such as this one is best done at night. It’s soooo romantic 🙂

Call it a stroke of luck, we were surprised and thrilled upon seeing the full moon that night. It is so large from our location that time and if only I can grab it and put it on my pocket LOL. We attempted to take pictures, but the zoom of my camera cannot capture it. When we passed by the Marcelo Fernan Bridge for the second time, the kids who were playing in that area started shouting and waving their hands. We waved back like celebrities. I think that is a good way of welcoming luck to your life, as an old superstitious belief say. I took some videos as well =)

The Sunset Chill-Out Cruise along Mactan channel is undeniably one of the most romantic getaways in Cebu on a budget. That time, I kept on telling myself that one day, I’ll try that specific cruise once again with a special someone. We will gaze at the moon and the stars while my favorite Bonnie Bailey, Kaskade, Hed Kandi or even Mike Francis songs are being played.

For 1hr and 30 minutes, I once again fell in love with Cebu. I wonder when will I ever fall in love with a Cebuano. Char =)). I suggest that you give this activity a try this coming Sinulog Festival 2012 or bring your special luvidubz on Valentine’s Day here. Teehee <3 You can avail the Sunset Chill-Out Cruise of Islands Banca Cruises for only Php 295/head inclusive of one drink. Special thanks to Andrea and Jeff for the invitation!