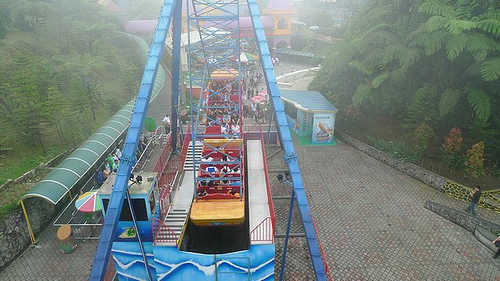 Like a kid again at Genting Highlands Outdoor Theme Park

Now that I am geared with the right outfit, it’s about time for us to conquer the outdoor rides!

We first went to the Flying Coaster, which is almost similar to the rollercoaster except that you are in the superman position. I also think this is a tamer version of the thrilling ride. A part of me was hesitant at first because i had a feeling that i will collapse anytime because of the coldness LOL.

We paid 10 Malaysian Ringgit and placed our stuff at the locker. I’m glad there were less people in line that time! The funny thing there is i wanted to back out when we were already in our positions.

“Pwede umatras? Takot na ako bigla..” (Can I back out? Got scared all of a sudden..)

“Kaya mo ‘yan. Umaandar na eh di ka na makakababa!” (You can do it. Besides, the ride just started you can’t go down!)

So there I stayed and enjoyed the very quick ride. That’s it? Hehe. I didn’t really feel much at the duration of the ride. think we only stayed there for a minute. Extension, please?

For our next ride, we tried the ‘Pirate Ship‘, which is quite similar to Enchanted Kingdom’s Anchor’s Away. It is the type of ride i learned to overcome as time passes by. Two years ago, I joined in a mini-olympics where we had to shoot tomatoes at the baskets held by those seating at the other side of the ride. Last year, we rode a fairly dangerous ride in Davao City which caused some of my friends to be frightened LOL. It’s fun to catch the expressions of those seating infront of us. Too bad we were not allowed to use our cameras during the duration of the ride. Boo 🙁

There’s this little restaurant which used the London Red Bus as their peg. I miss London! For now, i’ll pretend that I am back in London commuting via bus….

… and making calls at the London Red Telephone Box. 😀

The next is the Spinner, or fondly called the Giant Swing. As expected, kids flocked the said ride. I even noticed a few kids who obediently lined up for the nth time. I was able to capture this quick yet dizzy ride. Too fast, mistah! I’m not complaining though 😛 Edward is afraid of heights, but he loves the rollercoaster. He was forcing me to go and try it out, but i have a little phobia on rollercoaster rides. When I was around 7, I think I surpassed the minimum height requirement for the rollercoaster ride. I ate two sticks of hotdogs when my father asked me to go with him and try the rollercoaster in a local theme park in Metro Manila. I gave him a lot of excuses but he insisted. I ended up crying after that terrifying ride and your guess is just right – i puked after.

So I volunteered to carry some of Edward’s stuff and he lined up. When I was already convinced that I can surpass this challenge and conquer my fear of rollercoasters, people started lining up. I’m a lazy girl so yeah, my loss.

Here’s a video of me recorded out of fun. Will I finally ride the rollercoaster? Haha 😀

After exploring the outdoor theme park, we decided to just kill time at Starbucks. It feels rewarding to just relax in big sofasÂ while sipping your favorite coffee hoping it will help keep you up and alert. Free wifi usage too!

Using Techy Romantics’ ‘Daydream’, I created a compilation of my video clips at Genting Highlands. Sorry if some parts are a bit shaky. Enjoy!

Book a Genting Highlands Day Trip with Klook for a hassle-free tour!!

Don’t you just love exploring the theme park? Reminds me to keep in touch with the inner kid in me 😀 Have you been to Genting Highlands? How was the experience?