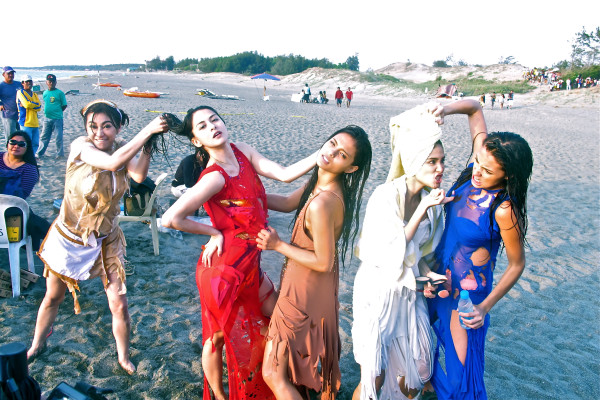 July will be a hot month in Philippine Cinemas. Why? Well, the remake of the Filipino cult film ‘Temptation Island’ is set to premiere on July 6 (tentative) on over a hundred cinemas nationwide. After twenty years, this Joey Gosiengfiao masterpiece will have its ‘modern’ flavor under the direction of Chris Martinez.

The new version of Temptation Island features some of GMA-7’s hottest female stars like Heart Evangelista (Virginia), Solenn Heussaff (Pura), Lovi Poe (Serafina) and Marian Rivera (Cristina). Playing the role of the maid is Rufa Mae Quinto as Nympha. The new character names were taken from some of Joey Gosiengfiao’s past movies. Playing the male cast members in the new version include Tom Rodriguez (the only cast member from ABS-CBN), Aljur Abrenica, Mikael Daez, John Lapus and Dennis Trillo.

Just like the original, the location of the new version is still in Sand Dunes a.k.a. Desert of the North. I haven’t been to the place yet (or i think i did as a kid, but i was too young to remember every detail!). Although the tourism standing of the Ilocos Region is picking up because direct flights from Manila are now available, I have a feeling that once the movie makes it in the box-office, Sand Dunes will be one of the Top Travel Destinations of Luzon.

Here’s the updated trailer of the new Temptation Island movie:

I must admit that i am a fan of the original movie. I love how funny yet witty their lines are! Although there are mixed reviews about the trailer of the new version, I still feel that the girls will be able to portray their roles well particularly Lovi Poe, who will reprise the role of Jennifer Cortez as the spoiled brat Serafina (formerly Suzanne).

Are you looking forward to this upcoming sexy-comedy film? Have you seen the original version of the movie? What can you say about the new Temptation Island?