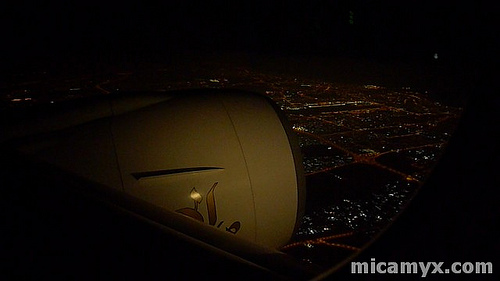 I’m staying here in England for a month now and i would like to share my first Emirates Airline flight experience. From the Philippines, i took an 8 hour trip to Dubai, stayed there for two hours and went straight to Birmingham.

Emirates Airlines is already a top choice for most Filipinos since it is a bit more budget-friendly compared to other airlines. Even Overseas Filipino Workers would agree with me. I’ve also heard a number of positive testimonies about their Emirates Airlines flight experience that’s why I decided to book a roundtrip ticket with them.

Although i’ve been to the Ninoy Aquino International Airport Terminal 1 (NAIA 1) a number of times, it was my first time to take a flight from there. I went to the airport as early as 8PM (my flight is scheduled at 12:20AM) hoping that the check-in line is not that long. I was surprised when I found out that some passengers were earlier than me 😛 Lining up made me wonder on what destination they’re all headed to. The mother and son passenger who lined up before me were taking a connecting flight from Dubai to Italy. The guy at behind me is going somewhere in Africa. As expected, majority of the passengers were Filipinos (at least 80% hehe). The rest are backpackers and businessmen.

When I reached the baggage check-in counter, the crew gave me my two airline tickets with my baggage stub (30kg min). After filling out some forms and passing through the immigration, i went straight to Gate 4 to wait for my flight.

To be honest with you, I was happy sitting there while waiting for my flight. An old couple approached me and they narrated their Dubai adventures. They’re going back for the 3rd time to visit their son and they were excited. Another backpacker ended his Southeast Asian Trip in the Philippines and he’s all praises with Boracay, Palawan and Sagada (wait… i haven’t been to Sagada!).

The plane arrived and I can’t really wait to finally sit there and sleep. It is my first ‘big’ flight and i was really eager to take pics and videos. I picked the Window Seat so i can record my first take off. Unfortunately, i was seated at the Wing part :/. The flight attendants gave us wipes, blankets and headphones. There is a small screen at the back of every seat where various movies and songs were installed.

After the legendary take-off (legendary? LOL), i started browsing through the music library. They served Savoury Snacks immediately much to the delight of the passengers:

I love how the Flight Attendants responded to our requests. They were smiling and courteous. I browsed through the movie list after eating my snacks and i picked the Sam Milby – Anne Curtis movie ‘Babe, I Love You’ hehehe. I missed the regular screening HAHA 😛

I also listened to some of the songs installed. My favorite selection is the UK Hit Charts categorized by year.

I only managed to take a short nap because i was preoccupied with movies and music most of the time. After a few hours or so, the Breakfast was served.

We were slowly approaching Dubai! I have some high school classmates who are presently working Dubai. If only they’re permitted to go inside the airport T_T

Dubai, based on what i saw from up in the air is an interesting place. I would love to spend a weekend there soon. Staying in the airport is already enough for me… for now 😛

Now we safely arrived at the Dubai International Airport Terminal 3! I was quite surprised when i went in there because i saw mixed nationalities from different walks of life. The Duty Free section is jampacked and they have a hundred gates for passengers. I think it is the central hub for all passengers using Emirates Airlines. Before I took photos and purchased coffee, the first thing i did was look for our boarding gate to Birmingham.

I went to the gate for Birmingham immediately and guess what? I am the only Filipino passenger for this flight. I chatted with a few friends online while waiting for our flight.

This time, i was already seated at the aisle. We left Dubai at 8am and we’re expected to arrive in Birmingham at 11:40am. Now i can feel the time difference. I was about to experience the longest morning of my life LOL.

Like what i did on the first flight, i browsed through the movies and music selection. This time, i was surrounded by kids.

Here’s what I had for Breakfast (again!):

After eight or nine hours (i am not quite sure about this haha), we finally arrived at the Birmingham International Airport. To be honest, i was surprised with the coldness. Yes, i was expecting it, but i didn’t imagine it to be that cold! I’m glad that my mom and ate virgie were already waiting for me outside.

Yey! Reunited with the family after three years! Thanks to Emirates Airlines for the safe and happy trip to UK! 😀