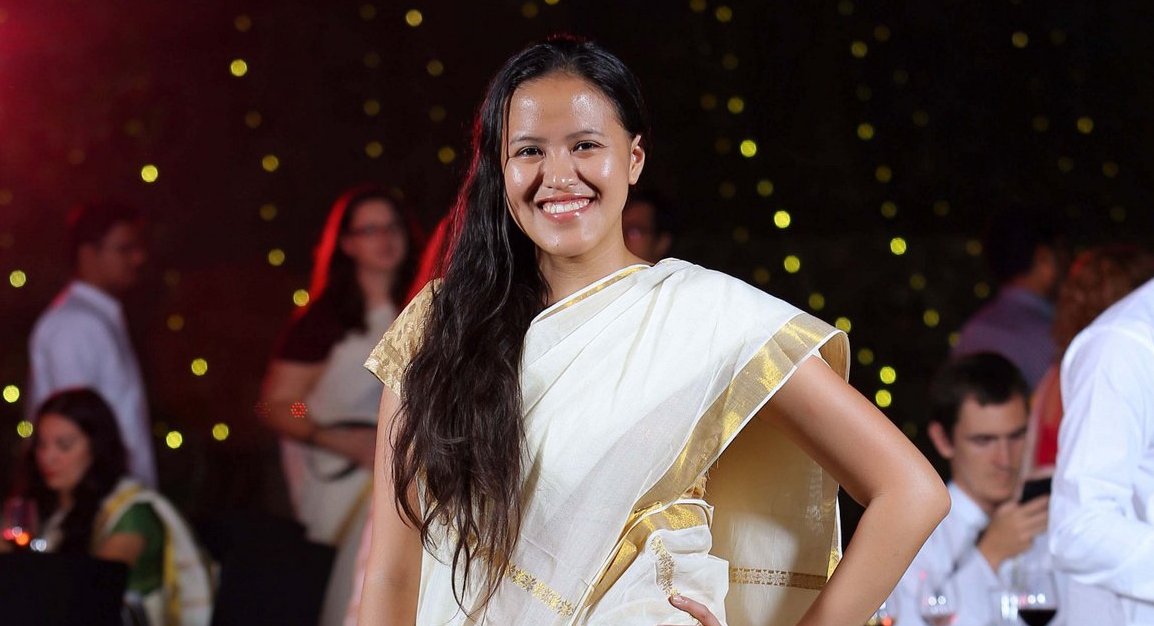 WelcomHotel Raviz Ashtamudi in Kollam: Of Luxury and Surprises

When I flew to Kerala, I already knew that we will be staying in some of the best hotels. I didn’t really have big expectations to avoid disappointments.

Little did I know that the group is in for a major surprise.

From Trivandrum, we visited an Elephant Rehabilitation Center and an Ashram Center, where I learned some important facts about Yoga. With the hot and humid weather, it is just understandable on why most of us were feeling tired after lunch. We simply want to go straight to the next stop (preferably the hotel where we’ll be staying!) and just chill.

Everyone on the bus were surprised when we arrived in WelcomHotel Raviz Ashtamudi in Kollam. Why? Well, a group of local drummers were waiting for our arrival and they started playing when they saw the bus approaching!

It is a tradition of most luxury hotels in Kerala to spread vermillion on the forehead of the guest before checking in. They also gave us a cute necklace made of cardamom! 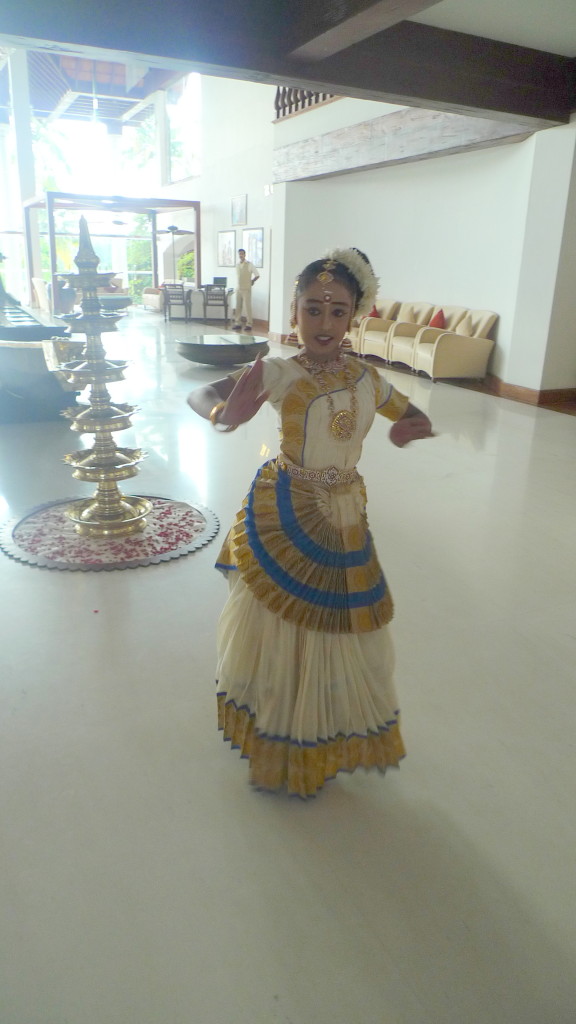 Another surprise was waiting for us when we arrived in the lobby area. A petite Mohiniattam dancer entertained us with a dance presentation while we’re sipping the welcome drinks. Finally a cold drink! 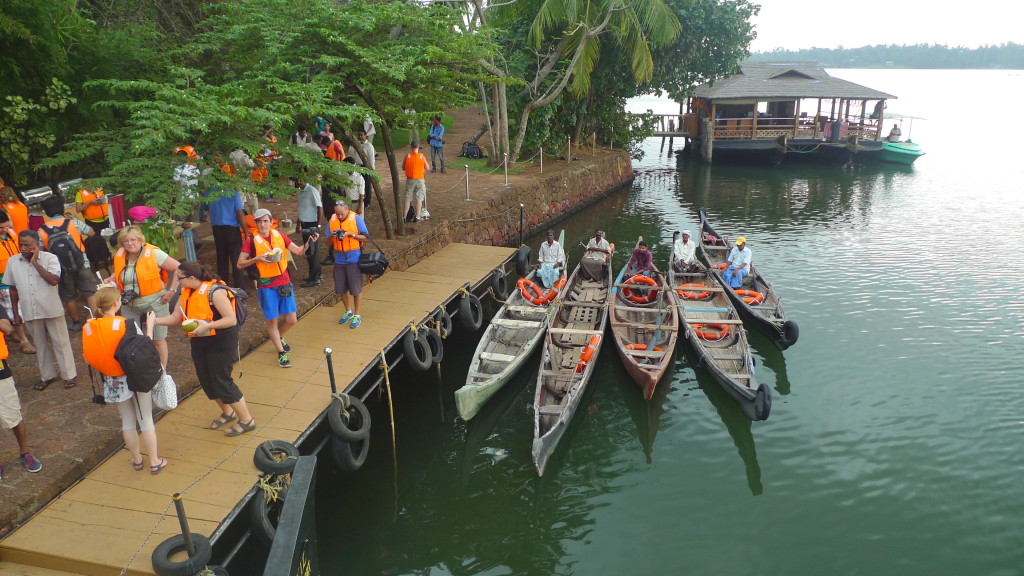 It was almost sunset time when we arrived, but the hardworking staff of WelcomHotel Raviz Ashtamudi tried their very best to make us feel welcome. We did a 15-minute short cruise within Lake Ashtamudi, the gateway to the famous Kerala backwaters and the Arabian Sea. As expected, the bloggers kept taking pictures, videos, selfies and so on!

Isn’t it obvious that we’re all having a chill time cruising along Lake Ashtamudi?

Then we found out we’ll be canoeing! 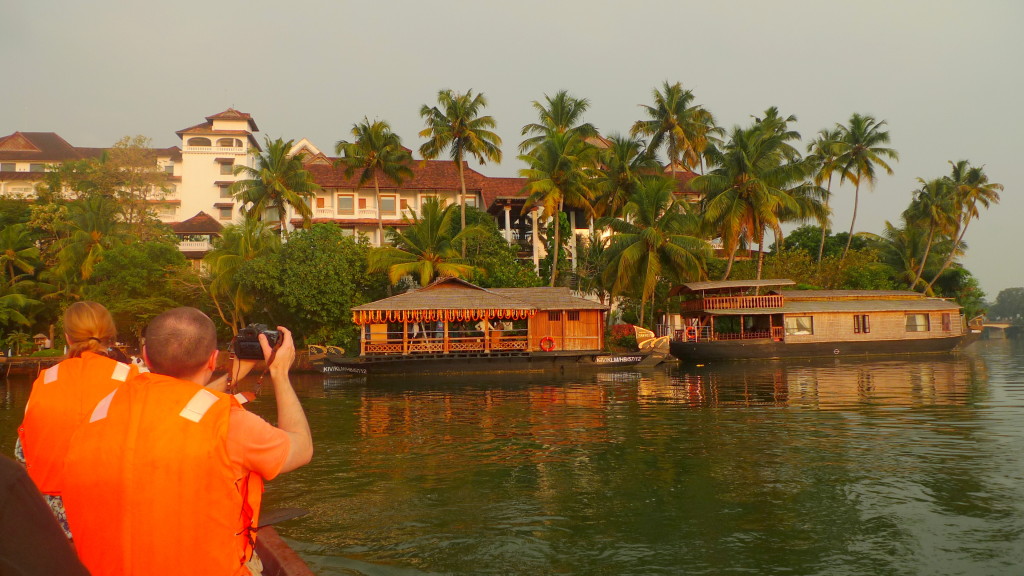 After competing to acquire a spot in the Kerala Blog Express bus, it seems like we’d be competing now by exerting extra effort via rowing (the boat, not the vote) and the first group to finish one round wins. Prize? Uhm, just to be first in line in the long table where snacks, coffee and teas are placed.

We did a short property tour afterwards. I think we only covered 30% of the property because we need to get ready for the dinner party, where we’ll be wearing traditional Indian clothes!

The Green Leaf Certified Ayurvedic Spa has 9 specially-designed rooms for Ayurveda and Spa treatments. You know what makes it special? The overlooking view of Lake Ashtamudi especially by sunset time! It would’ve been great if we had the time to take any of the treatments even just for one hour. 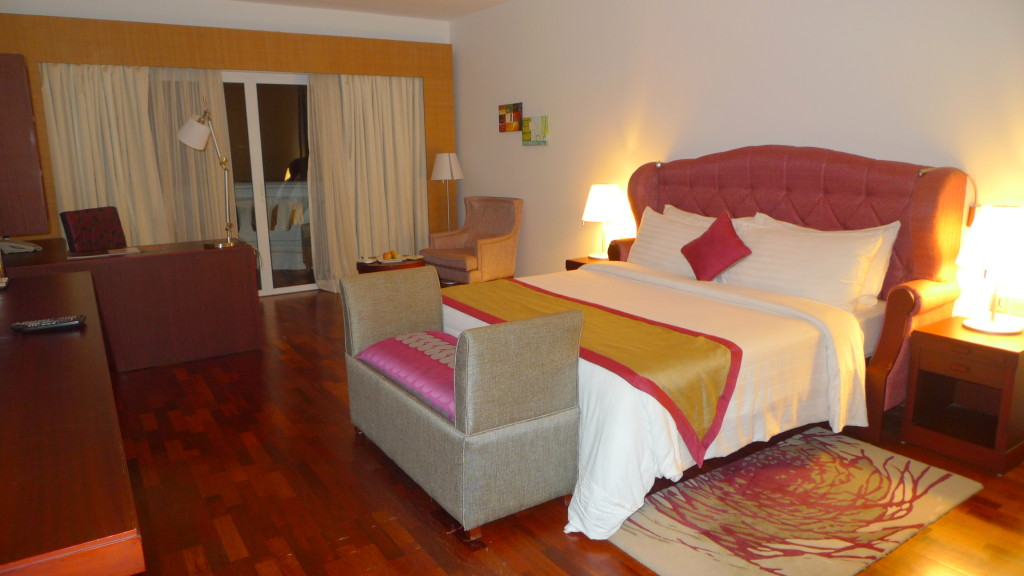 I am one of the lucky ones to stay overnight in WelcomHotel Raviz Ashtamudi (the other half moved to a different hotel after dinner) and I jumped upon seeing how big my room is. I screamed like a little girl when I saw the bathroom, which has a separate toilet/shower room and my favorite part? the bath tub jacuzzi!

^Found on this video is a rushed room tour. 😛

Surprise #4: Wearing a Sari for the First Time

For me, the Sari is one of the most beautiful traditional dresses in the world. It is still being used by locals when they do daily chores and I’ve always wondered if I’ll be given the opportunity to wear one in this trip.

I never realized wearing a sari is quite a complicated process. One of the staff members went into my rooms to assist me. I can’t even remember every step, but I do recall our conversation. She said she wore a similar sari when she got married and that I will pass as an Indian girl. Get ready, Bollywood!

While looking for my fellow bloggers in the lobby area, I noticed a little commotion in one corner. There’s this good-looking foreigner who is graciously accommodating the photo requests of the other guests and even the staff members. I remember when one of the organizers told me that the guy is from the media and he is shooting some scenes for his show.

I’d admit that I didn’t really know who he was until a staff member told me his name.

“He’s David Rocco from Canada. He is here to shoot a special episode about our cuisine here in Kerala.”

David Rocco… Oh now I remember why his name is familiar – I found some of his recipes on Pinterest!

Like the other guests, I also approached David Rocco and asked for a photo. He asked me when I’ve seen any of his shows. I just smiled and nodded hesitantly. I wanted to reveal that I actually found him on Pinterest lol 😛 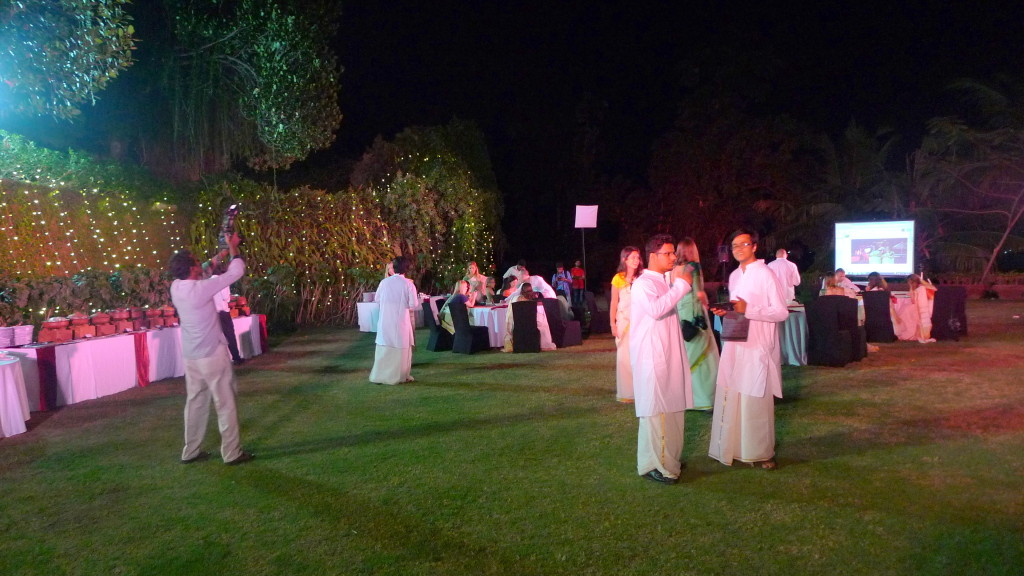 Everyone really looked great and it’s nice to see everyone wearing something special. It’s good to ditch the usual outdoor traveler clothes to something really elegant. 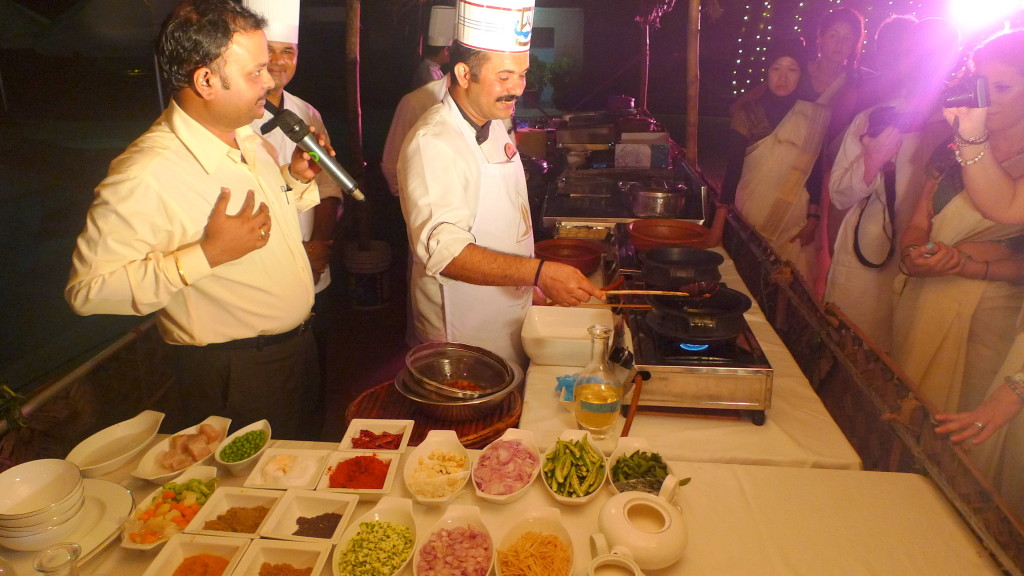 The Marketing Team presented a short background about ITC Hotels and the WelcomHotel Raviz brand. Because of this, I am more keen on exploring the other properties scattered all over India and just recently, in Dubai. UAE.

A cooking demonstration followed then we were given the go-signal to invade the buffet table. Plate full of good food and white wine… what more can I ask for? Add the fact that we’re wearing saris made the night more spectacular.

But I have a silly story to tell 😛

Ever since I arrived in Kerala, I have this habit of almost putting every dish on my plate. I get small portions and just try everything. I’m not much fond of spicy food, but I can tolerate it. Also, hunger is the worst enemy! I just need to eat! 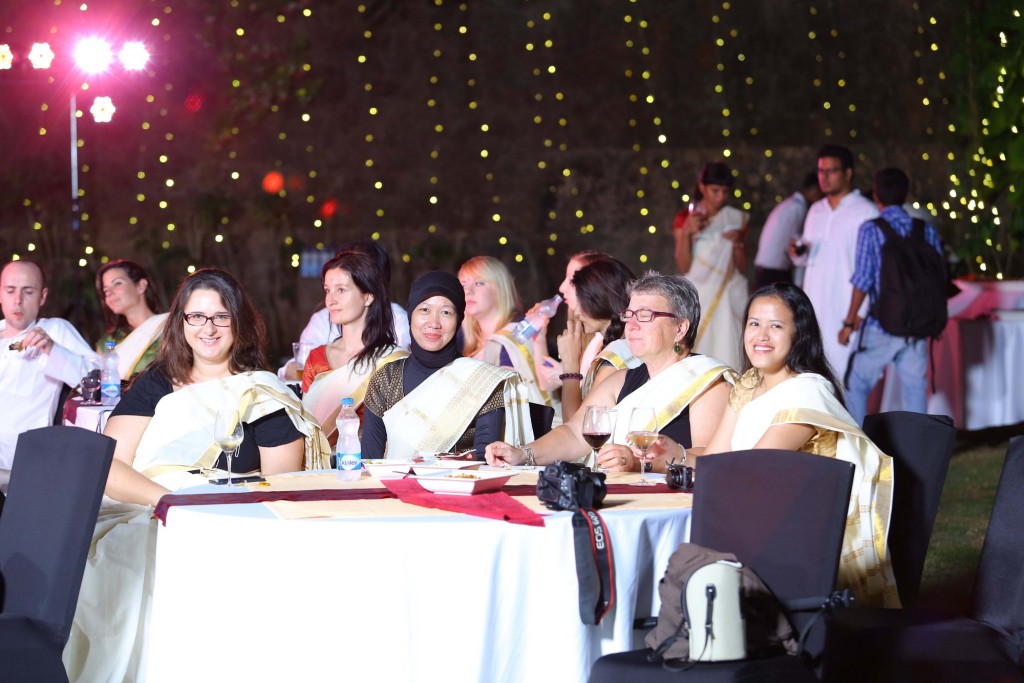 “What did you get? Is it good?” Rosemary asked while Donna and I were discussing how Indonesians really love spicy food. In the Philippines, our local cuisine are either sweet (menudo with sugar :P) , sour (sinigang na hipon, baboy o bangus) or bitter (Pinapaitan ftw!). I think that is the difference of Pinoy food with the rest of Southeast Asia. Ours are not really spicy.

“I got every dish in my plate, I believe.” I replied while tasting bits and pieces of my food.

“What did you put in your rice? Is that spicy?” Donna asked.

I finished the portions I liked even if most were spicy. I guess I am that hungry (as always!).

After our solo and group pictorials, I went back to the buffet table for round two. This time, I shared the table with Vineeth ad Arun, who were responsible for the official videos of this trip.

“What do they have for dessert?” Vineeth asked me.

“I don’t know.. I think there’s ice cream on the other side.” I replied.

Vineeth stood up and went straight to the dessert buffet table. I was just quiet when he got back to our table.

“Hey, I did something silly earlier.” I confessed.

“I didn’t know that’s the dessert table, but I put this thing on my plate earlier on top of the rice!” I uttered shyly.

“Are you serious? You’re kidding, right?” he was trying to control his laugh this time.

“I’m not kidding! I didn’t know what it was and the lights are quite dark so I just put everything in my plate – including that sweet thing!”.

“Oh, no! That’s for dessert Mica and not for the rice!” Arun said and we all laughed at my LOL moment.

To make me feel better and not too embarassed with what I’ve done, my two friends said that even the locals do make mistakes in terms of food selection since Kerala and Indian cuisine is quite broad. But they admitted mine is the funniest food mishap in the world.

Surprise #8: We have to leave early in the morning

It took me twenty minutes to remove my sari. Too many pins and I am eager to try the jacuzzi before I sleep.

After answering a few emails and update social media, I slept immediately as we need to wake up early the next day to move somewhere again. 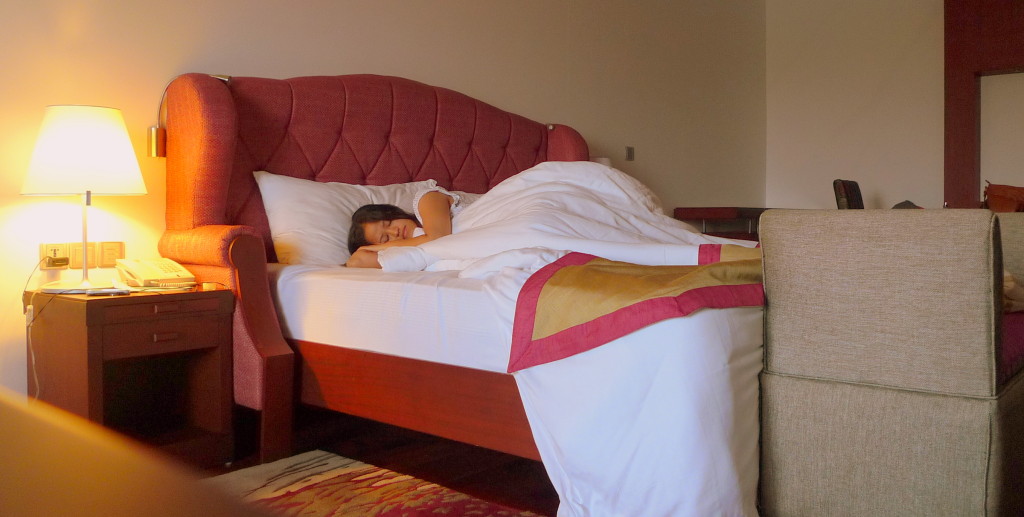 Rise and Shine! Take a bath and Pack again :/

Almost everyone is in the lobby area by 8AM taking pictures and for sure, most are secretly wishing we’d be able to stay there in full 22 hours to explore the property and just dine in leisure at any of their in-house restaurant. There’s the WelcomCafe Riverside, Shanghai Club, Raanthal, Zirkon or The Portico.

But we have a schedule to follow. We may have stayed shorter than the usual, there is no doubt that WelcomHotel Raviz made us feel welcome in Kollam. Hospitality at its finest!