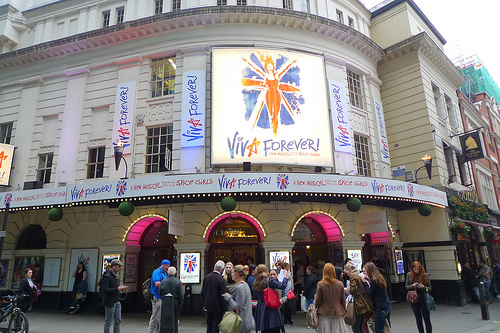 The fans of the Spice Girls rejoiced when the famous five announced years ago that a musical based on their hits will premiere in London’s West End. The launch of Viva Forever! The Musical last December 2012 is the perfect gift for every Wannabe. The songs of the Spice Girls is a good example of British pop – good lyrics, catchy melody and thought-provoking themes. Imagine how surprised I was when the girls themselves confirmed the news that Viva Forever will have its last screening on June 29. Geri Halliwell even blogged about it, which made a number of supporters disappointed. A lot were expecting that Viva Forever will at least have a one year run. Maybe this is a learning experience for everyone. I’m sure they figured out what went wrong.

Lucky for me, I flew to the UK at the right time! June 12 was a special Spice date for me and my mum. We went to London to catch Viva Forever The Musical at Piccadilly Theatre. It was fun to see a number of obvious Spice Girls fans in one venue. I spotted a number of girls whose outfits reflects which Spice Girl is their favorite. I lovedÂ the gay couple who were really enthusiastic upon wearing their souvenir shirts. The verdict? You can read my full review here.

I will take advantage of the fact that I am just a train ride away from London. I’m planning to watch more musicals like Dirty Dancing, Billy Eliot, The Bodyguard and The Book of Mormon.

Travel Photo of the Week