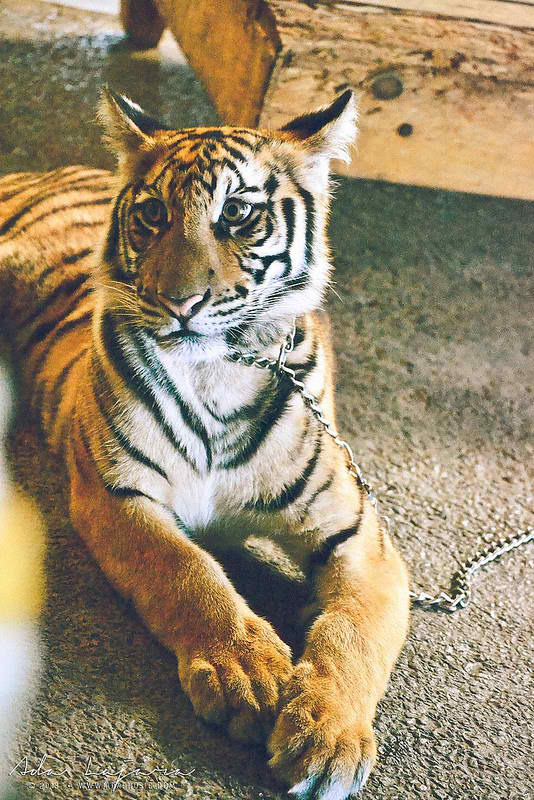 Zoobic Safari â€“ The Only Tiger Safari in the Philippines

The group woke up early that Sunday morning. After a sumptuous breakfast at Subic Homes, we packed our things, left our luggage at the van and drove to the only Tiger Safari in the Philippines â€“ Zoobic Safari! Rawr! I noticed a lot of parents with their kids in tow when we arrived at the reception area of Zoobic Safari. It is a busy Sunday morning for the crew and the animals living inside the vicinity. At the middle, the other guides were giving short lectures to incoming visitors. There are several species of tigers at caged at the left part and the White Tiger is the most popular. On one side, we spotted a relaxed Tiger Cub. The group didn’t let the opportunity pass to have a souvenir photo taken with her. Like a real baby who wants to be fed with milk, he strongly jumped to her chair and sucked milk from the baby bottle. I have to be honest that I was a bit scared when she took that leap towards our direction. She’s strong, but gentle.

Our tour guide gave us a quick insight on what to expect inside the Zoo and the Tiger Safari. As a teaser, she ushered us to the Zoobic Park, a walk-through petting zoo in the tropical jungle where friendly exotic and farm animals are seen.

We also passed by the Savannah-inspired sanctuary, which houses a wide range of exotic and farm animals like ostrich, camels among others.

The Serpentarium is the next one, where snakes, lizards, iguanas and turtles of various species were found. That day, most of the kiddie visitors were waiting for the Animal Show and Parade.

The highlight of our visit is the Tiger Safari. Visitors gets to see the tigers â€˜on the wild’. The Safari Jeep keeps everyone safe from the possible danger the Tigers can cause. We bought fresh chicken for Php 200 in order to witness the Tiger Feeding. Yay, here it goes! Up Close!

We toured around the area and saw some animals who can freely gallivant along the place. We also went in this section where the other Tigers are places in a big cage.

There’s also this one Lion, who did roar when we were near her. I also found out on this part of the tour that it will take three long days before you can get rid of the smell of the tiger’s urine. Toinks.

Zambales is the home of the aetas. It is nice to know that they feature an Aeta’s Trail, where visitors can get a glimpse of the music and dance of the aboriginal Aetas. The monkey dance is quite entertaining! We also met a little boy named Aljur, who didn’t hesitate to show us some of his gangnam style moves. Go kid!

We also passed by the Hip Hop Bay-a-Walk, where you can hop on elevated steps to go to the next destination. I’m glad there were no bayawaks when we tried it haha 😀

The Croco Loco houses a lot of crocodiles. I suddenly remembered that one incident wherein a friend of mine almost caught an accident while filming for a tv show.

The remains of the animals that passed away are placed in a museum, which serves as a tribute to them in a way. No creepy feels here. So how’s my first Philippine-Safari experience? Let’s just say it surpassed my expectations! The animals were well-taken care of and it is a pleasure to see that this establishment opened a lot of jobs for the locals.

Photo Credits: Adaphobic and Lakad Pilipinas. Thanks for the wonderful photos! Love you both! 😛

How to Get to the Zoobic Safari:

Victory Liner (Pasay, Caloocan, Sampaloc and Cubao) â€“ hourly service from 4am to 6pm. Olongapo terminal is located at the APO Monument. Take yellow jeep up to SBMA main gate. Then walk to the taxi stand and take a taxi inside SBMA. The fare to Zoobic Safari is Php400/taxi one way.

Take the North Luzon Expressway and exit after Dau going to SCTEX. Take the Tipo-Subic expressway to go to Subic Bay Freeport Zone. It takes 1 Â½ hours from Balintawak, Quezon City to Subic.