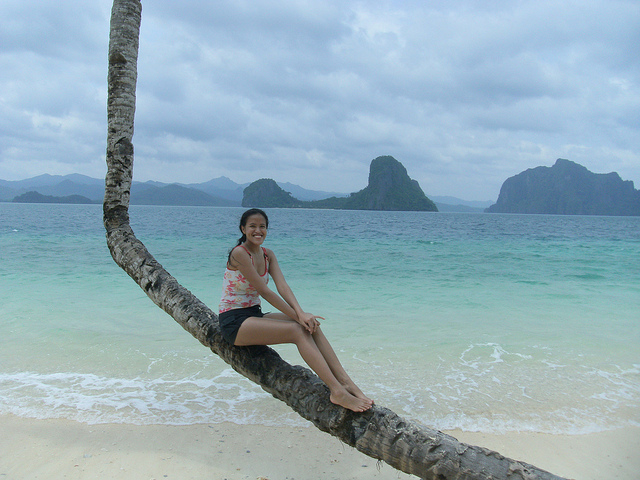 Taking a glimpse of El Nido’s beauty through the TOUR A package just made me crave for more! It is the reason why I took TOUR B the next day. Also, I am addicted to doing activities in chronological order.

That morning, Kuya Larry booked the TOUR B package for me via Clydenike and Guenkean Tours. I arrived at the booth at 8:30AM (too early!) and had the opportunity to talk to some of the locals. It is another busy yet productive morning for tour operators as tourists continue to flock to the beachfront to prepare for another island hopping day. Some were preparing for diving lessons.

I asked the lady in-charge in the booth on who my co-tour mates were. I also had the chance to talk to some people about Katrina Halili, who was born and raised in El Nido. She also owns a nice farm there and her family owns Residencia Katrina.

Later on, a Korean couple arrived. Then a Filipino solo traveler. A Filipino family followed. Woot. We’re ready to go!

Basta Pinoy, instant friends na! We exchanged stories on why we are taking the tour alone. I found out that Mark is too preoccupied with work and it is his first time in four years to enjoy the beach again. The Korean couple introduced themselves to us. Their names are Su and Suk. Easy to remember, right?

The youngest member of the group turned four years old that day. His name is Raq. His parents are from Puerto Princesa and they went to El Nido to celebrate his 4th birthday. The first part of the tour is a bit tricky (again) due to the strong waves. The water splashed to our faces right away, but the little boy didn’t mind. He seems to love it!

Our first destination is the Pinagbuyutan Island. Kuya Mark (tour guide), convinced me and Mark (LOL) to try snorkeling.

Both of us can’t swim, but Kuya Mark assured that he will take good care of us. We stayed in the island for almost an hour and I enjoyed snorkeling in the area. The rock formations in one part looks surreal. The coconut trees made the island look more appealing.

The next stop is the Cathedral Cave (a.k.a. Pinasil Island). We went there for sightseeing and picture-taking. The boat can’t enter and we were deprived to swim there due to the weather. Also, I don’t really think any of my co-tour mates would love to go there that time. I heard some stories about it though.

And woot, there’s the Turtle Island!

Time for lunch! We spent almost two hours in Cudugnon Island, where the famous Cudugnon Cave is located. Just like in Tour A, the boatmen transformed into chefs as they prepare for our Barbeque lunch. We took the opportunity to swim and enjoy at the beach. My friendship with Baby Raq started from there.

He followed while wearing his turtle-designed salbabida and lifevest. His parents followed and we exchanged stories about Palawan. I also asked for instructions on how to get to Port Barton. They also informed me about Port Barton being the top tourist destination of Palawan in the 80’s. We also had the chance to talk to Su and Suk (Korean couple). It is their second time in the Philippines. Last year, they went to Boracay. I told them about my very short Seoul trip last April and I just confirmed that Dara Park is the most recognized 2NE1 member. Yeah, yeah, yeah, yeah, yeah, yeah! 😛

Before eating lunch, we went to one part of the island where Baby Raq can blow the candle in his birthday cake. We became instant party guests! Happy Birthday again to you, Raq! I’m sure this event will retain in his memory. I can still remember how my 4th birthday turned out 😛

Of course, we didn’t miss the chance to explore the Cudugnon Cave. We entered through the hole and I felt ancient upon entrance (what ancient?! toinks). I’m just glad that my new camera is okay and I was able to take decent pictures. I even saw a bat sleeping.

I heard that some locals used to hide there during the war and some treasured were found there. I then remembered about the Tabon Cave, which is located in the Southern part of Palawan. Must visit soon!

It started to rain again, but that didn’t stop us from touring. Nothing’s gonna stop us now! The Vigan Island/Snake Island is the finale of TOUR B and I can say that this stop is my favorite! Beautiful mangroves welcomes its visitors with bonggang hello.

The sandbar. I want to make rampa sa sandbar #conyomodelol. More and more tourists arrived. We decided to stay longer and take the opportunity to spend more time enjoying the beach by swimming and playing.

Now I appreciate mangroves and staying in the middle of the sandbar makes me appreciate this trip more. I am glad I went to El Nido. I’m just thankful!

Our trip back to the town proper lasted for an hour and I remember feeling really tired.

Baby Raq went to The Alternative Inn to visit me and we had early dinner there. So sweet! I also talked more to his parents about Puerto Princesa and Palawan in general.

One of the things that I truly appreciate in this trip is the good side of traveling solo especially in a place like El Nido. You are not alone.. not at all.

EL NIDO TOUR B costs around Php800 with lunch. Water is not included.

Search for discounted El Nido hotels through the search box below! Book and receive instant confirmation!