Skip to content
Home > Trekking > Rafflesia, we will trek for you! 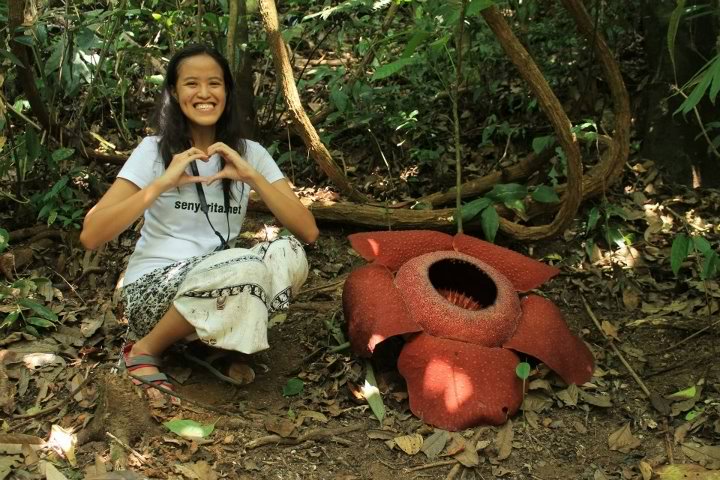 Rafflesia, we will trek for you!

While searching for things to do in Cameron Highlands for the next day, photos of Rafflesia posted on a number of tour bulletin boards caught Edgar’s attention. For years, my travel mate had several attempts to see a Rafflesia in full bloom. He even trekked for long hours in a jungle somewhere in Antique just to go home disappointed.Â  I think he even tried his luck in Kota Kinabalu. Guess catching a Rafflesia in full bloom isn’t easy for EAZY, eh?

Because of the Rafflesia phtotos scattered all over Tanah Rata, he asked me if it is ok with me to trek for hours to see the biggest flower in the world. I am ok with it although I am not really a hardcore hiker (I think the Batad trek is the most challenging I’ve done so far). Also, I didn’t bring any rubbershoes with me (since I don’t own one) so I just bought my first ever outdoor sandals in a nearby shop for RM54. Not bad 😀

Most tours were fully booked since it is a weekend. We ended up in Hill Top Travel & Tour booth near a popular coffee shop chain. The one in-charge in the booth convinced us to book the Rafflesia & Mossy Forest Adventure, which is a full-day tour package for RM98. At first, I find it expensive, but the travel agent explained the travel time and the activities included in the package. Our main concern here is the Rafflesia since we really want to see the one in full bloom. He assured that we will see exactly what’s in the photo in his phone. He even said that we will get our money back just in case his claims are not true. We even took a picture with him for assurance 😛

We woke up early the next day and ate quick breakfast somewhere near the ticketing office. Later on, a 4X4 Land Rover picked us up and tried to squeeze all nine passengers in one ride. The one-hour drive to the trekking point at Lojing Highlands was a challenging one with all the zigzags and bumpy road. Is this a part of the adventure package? Toinks. We had fun though LOL.

Upon arrival to the trekking point, a Senoi-aborigine gave us creative headpieces, which I believe symbolizes a good welcome to the visitors. The Malaysian-Indian driver named Velu also served as our tour guide for the day.

Am I ready to trek for Rafflesia? Bring it on!

Being the competitive bullhead that I am, I went ahead of the group and followed the hiking pace of our guide. We had to climb in steep parts during the first few minutes under the heat of the sun. Why do I act as if I am in a hiking competition or something? LOL

And with that, I started having difficulty in breathing. I almost thought I wouldn’t make it. Thanks to the Senoi-aborigine guide who went with us, he said that I shouldn’t rush and he will just walk in the same pace as mine. Again, this is not a hiking competition. I simply don’t want to be a burden to the group so I still tried my best to walk as fast as possible. The most unfortunate thing that happened during the trip is when my camera gave up on me. Why give up now? Please hold on and don’t give up on me â€“ yet!

Although exhausted, I did enjoy trekking in the jungle forest due to the scenery and the interesting medicinal plants we saw along the way. We had a number of stopovers and before I knew it, we’re just a few steps away from the Rafflesia!

There you go! This particular specie is called the Rafflesia Kerrii, the largest specie of Rafflesia ! You can really see the excitement in Edgar’s face when he finally saw the Rafflesia up close! If I remember it right, it is the second day of bloom of that particular Rafflesia. Beside it is a â€˜baby Rafflesia’, which will take months to reach full bloom.

The trek to see the Rafflesia is worth the effort! Prior to the trip, we didn’t know that Rafflesia can be found in Lojing Highlands, which is located outside of Cameron Highlands already. It is in the neighboring city called Kelantan.

Going back to the main trekking point is a lot easier. Apart from that, we were able to drink water through a bamboo stalk â€“ my first time! Call it a stroke of luck, but we’re really glad that we pushed through with this trip particularly because of the Rafflesia. It is one of my most interesting discoveries while traveling. Right timing, indeed!

We went back to the 4X4 Land Rover with big horns to our next destination. Happy trekkers are satisfied =)

All pictures courtesy of Edgar Alan Zeta-Yap of Eazy TravelerÂ since my camera gave up on me 0_0 You can read his more comprehensive post about the Rafflesia here.