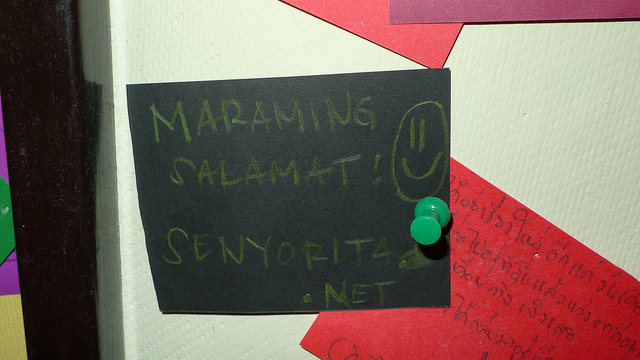 Traveling Solo in Chiang Mai – The Ups and Downs Part 1

“Do you think I’ll survive in Chiang Mai with this budget?” I asked two friends a night before my trip back to Bangkok.

“Yes. As long as you live within your means. Chiang Mai is an ideal place for budget travelers. Food and shopping items are cheaper there compared to in Bangkok” they replied.

I went back to Bangkok by myself on Valentine’s Day. I remember contemplating while I am on the bus to the Poipet border. I am still not sure if I should pursue that trip to the Northern part of Thailand or just stay in Bangkok doing nothing. As they say, Bangkok is a place for the shopaholics. I am not one of them. Commuting in big cities automatically makes me lazy.

I asked for a sign: If the bus trip through a travel agency going to Chiang Mai is less than 500 Baht, I will take the night trip. If not, I will just stay in Bangkok and try to figure out how to explore the city in the cheapest way possible or worse, just walk within Khao San Road the whole week with the hope to see something new. Or maybe explore some parts of Silom or Patpong or just go back to the Philippines and regret why I even opted to extend my stay in Thailand without much money in my pocket.

Anyway, I woke up early the next day and went straight to a nearby travel agency. Fortunately, the bus trip from Bangkok to Chiang Mai is 400 Baht. Yes, I can get a cheaper fare or mode of transportation, but I am a lazy girl. I don’t want to move much and commute to another bus station for reservation with all the traffic and I’m tired. I booked the 6:30PM trip immediately and went straight to a restaurant with free wifi somewhere in Soi Rambuttri to kill time.

I figured out that the night trip is very favorable since I don’t really need to pay extra for accommodation that night. A motorcycle picked me up from the office of the travel agency and I felt a bit hesitant at first. Should I still continue this trip or am I being scammed? LOL. Paranoid much?

The motorcycle driver brought me to a canteen-like place where other travelers like me were waiting. I saw a couple of girls writing in their journal while a Japanese guy kept himself busy reading comics. A group of European guys followed and they’re talking about the information they read from Lonely Planet. More and more tourists came in. I felt a bit hungry so I bought mangoes for ‘dinner’. I feel so out of place. Why does it feel so weird to be an Asian traveling in an Asian country? I may sound weird with that question, but yeah… why?! I think among the bunch, only me and the Japanese guy were quiet.

The bus arrived fifteen minutes late. I’m just glad that the bus is not fully occupied. The trip turned out to be a comfortable one since I was able to lie down and there’s a blanket too. We had one stopover in that 11 hour bus trip. Thanks to the music of Kazaky for inspiration LOL.

The bus arrived in Chiang Mai at 5AM and wow, WHAT A COLD WEATHER! Glad that I wore a thick long-sleeved top that time but we were all shivering. A red-coloured transportation called Songtaew was waiting outside. I talked to the Japanese and Argentinian solo travelers on where they’ll be staying. Both of them didn’t reserve a room in any hostel place. I showed the address of my Roomorama accommodation and I’m glad that the driver knows where it is. The three of us agreed to chip-in for the transportation. I will be dropped first then the two will be looking for a place somewhere in the Old City, where the main attractions are.

So I was dropped in Galae Thong Tower early in the morning. My check-in time is 12pm so I didn’t really have a choice but to leave some of my things at the information desk and look for a possible place where I can eat breakfast outside.

I walked through the street and encountered some dogs that are barking out loud. I am not really fond of dogs and it easily frightens me. I chose to just ignore them and just continue walking. I’m glad that I found an eatery where some students were eating. I ordered a breakfast meal for 30Baht drinks included. Not bad!

I went back to Galae Thong Tower and stayed in their in-house restaurant, which opens at 8AM. I used their free wifi and ordered a tall Mocha drink for 70Baht 0_0 . I took the opportunity to talk to my mom and some friends about my whereabouts. I don’t want them to get worried. I could’ve explored Chiang Mai that early, but I want to just relax for the meantime.

I ate lunch there for 40 Baht then a lady working in Galae Thong Tower told me that I can now occupy my unit for the day. I am pleased upon seeing my unit. I felt like an expat who is living on her own in Chiang Mai especially when real expats were chatting along the condo lobby. Read the review of my first Roomorama stay as a guide. Alternatively, you may also check out this blog by HotelsCombined on Where to Stay in Chiang Mai: Nimman or Old City for more accommodation options nearby Chiang Mai’s interesting attractions.

After taking a quick nap (uhm, 30 minutes?), I decided to go to the Old City by hiring a tuktuk for 60 Baht. I was a bit amused upon seeing the ThaPae Gate and started walking from there. As usual, there were more tourists sighted compared to the locals. You can see all types of travelers mostly westerners. If ever I bump into an Asian, most probably they’re Chinese, Japanese or Korean. The thing that I love about it though is they smile whenever I look at them. I smile back, of course. Isn’t that a welcoming gesture?

I spotted a number of solo travelers who like me, they’re also exploring Chiang Mai on their own by walking. The Milk Tea addict in me prompted me to ask for places where I can buy Thai Milk Tea. Luckily, I entered in the temple called Wat Pan Ohn and they have a number of tables and chairs there. I spotted a lovely lady selling some refreshments on the side. I bought my first glass of Thai Milk Tea. It serves as a little reward for myself for a job well done in reaching Chiang Mai 😛 . The lady started talking to me in Thai, but I told her that I am Filipino. Surprised, she mentioned that she only met one Filipino in the area (I bet that Pinoy is a blogger too hihi). For 15 Baht, I had a blast.

After a few minutes, I started walking again. I entered in a number of temple houses. One includes a massage place where female prisoners serves as the masseurs. There’s this one temple full of good sayings. Too bad I didn’t take down notes. There’s too many buddhist temples in Chiang Mai. I think almost every corner has one.

With the Free 3D Chiang Mai map as my guide, I walked around until I got tired and sat down infront of the Three Kings Monument. It is considered as one of the most important landmarks of Chiang Mai. Wah, I want a photo taken. I then realized that although I love the freedom of exploring a place on my own and at my preferred place, it is still nice to travel with someone especially if they’re good photographers LOL. I want a good photo of me taken beside the monument. I’m glad that a Korean couple asked me to take their photo and they offered to take mine.

When they left, they suddenly hugged and kissed. That gesture made me smile and at the same time wonder. Is Mr. Right somewhere here in Chiang Mai? Haha I wish. You all know the answer by now.

I saw couples, families and groups traveling together. Whenever I see a solo traveler, I see to it that I smile at them. Just like what Avril Lavigne mentioned in one of her songs, ‘I don’t know who you are, but I’m with you’.

I went to this cute coffee shop to access wifi. I met a young American couple and when they figured out that I am Filipino, they started asking me about the Philippines. They want to explore Cebu, Bohol and Siquijor. I told them that I’ve never been to Bohol and Siquijor, but I’ve been to Cebu 10 times. That conversation happened in February and as fate would plan it, I did a Cebu-Bohol-Siquijor-Dumaguete trip last week of March 😛

I really love it whenever travelers ask me about the Philippines and the opportunity to hear their side on why it is the less preferred SEA country to visit. It’s not that they don’t want to explore our country. They really do! The only problem is most of them are on a strict budget and we all know that exploring the Philippines can be expensive in terms of transportation.

Before dinner time, I left the Old City and started walking to the Night Bazaar. Still carrying my heavy backpack with me, I explored the streets at night. I almost got hit by a motorcycle and I got scared. Well, life goes on. Walk this way! 😛

I finally reached the Night Bazaar and I am really fascinated with the items being sold. The people behind these handicrafts are creative! I sat down in one corner and met a Korean backpacker. We started guessing each other’s nationality. At first she thought I was Thai and then Malaysian then ‘Philippine’. I said yes. I guessed right away that she’s Korean and she mentioned that she wants to visit Boracay soon. We parted ways eventually.

Why am I here? I don’t have plans of buying anything so I must leave this place immediately. Instead of hiring a tuktuk, I insisted on walking at night. The map says that my lace is just 15 minutes walk from the Nigh Bazaar. To make the long story short, I walked for more than 30 minutes. Hungry, exhausted and lonely, I reached Galae Thong Tower. It’s just nice that when I reached my home for the night, the in-house restaurant is still open. I ordered a simple meal and met a family living there. Later on, expats and locals who went home from work started coming in. Wow, I really feel like an independent condo unit owner in Chiang Mai!

I entered the studio unit and I felt sleepy. I am happy that I am able to reach Chiang Mai on my own, but isn’t it nice to share this room with some friends since it is pretty spacious? Too tired to be emo, I went to bed and enjoyed a deep sleep for 10 hours.