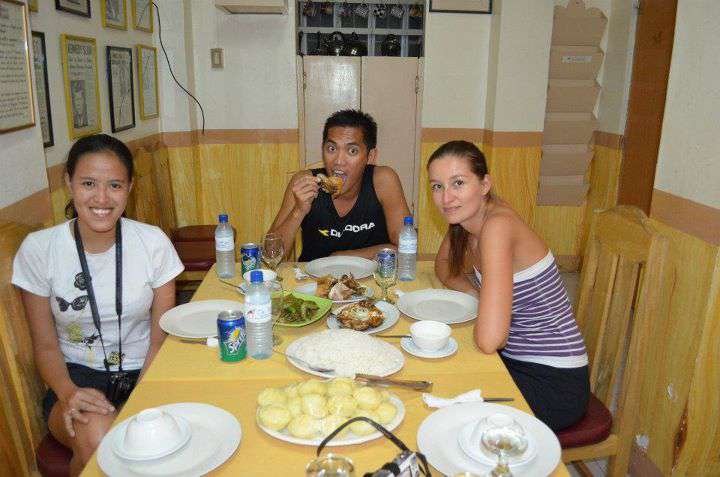 Former President Fidel V. Ramos is undeniably the most prominent political figure from Pangasinan. Born and raised in Lingayen, Pangasinan, FVR is the 12th President of the Philippines (1992 – 1998) and according to Wikipedia, “Ramos was widely credited and admired by many for revitalizing and renewing international confidence in the Philippine economy.”. I met him in person when I was in elementary since he would visit our school often. Being in touch with his beloved province and kababayans made him a very admirable person.

The President Hotel in Lingayen, Pangasinan is considered as a historical spot in Lingayen because the Ramos House stood there for years. The Ramos House Marker, which is located at the entrance of the hotel reads:

ON THIS SITE HAS STOOD FOR YEARS THE HOUSE OF THE COUPLE NARCISO RAMOS – LAWYER, JOURNALIST, STATESMAN AND DIPLOMAT AND ANGELA VALDEZ, ONE TIME ENGLISH SUPERVISOR OF THE PANGASINAN VOCATIONAL HIGH SCHOOL. IN THIS HOUSE WERE BORN AND RAISED THEIR CHILDREN: LETICIA RAMOS SHAHANI, AMBASSADOR AND SENATOR: FIDEL, AFP CHIEF OF STAFF. SECRETARY OF THE DEPARTMENT OF NATIONAL DEFENSE AND EIGHT PRESIDENT OF THE REPUBLIC OF THE PHILIPPINES: AND GLORIA RAMOS-RODDA.

I remember the first time I went to The President Hotel way back in 2005. My high school friend celebrated her 18th Birthday and the place was just introduced to the public. Widely popular as a place for wedding receptions, debut parties and other important events, I wondered how the place is as a hotel. Relatives kept on saying that some of the rooms are named after the Presidents of the Philippines.

Together with travel bloggers James, Josh and Alex (from Slovakia woot), we went to Lingayen and enjoyed an overnight stay at The President Hotel.

We arrived at 6PM – just in time for dinner! Ms. Violy, who was in-charge that day showed to us our rooms. Alex and I stayed in the RAMOS SUITE (Yey!) while the boys stayed at the MARCOS SUITE. Coincidentally, they are two of my favorite Presidents. Kulang na lang si Magsaysay 😀

Here are some pictures taken from our simple yet comfy room: Hungry travelers are hungry! They prepared a nice dinner for us – Pinakbet (I miss it so much!), Boneless Bangus and Chicken. We also had Special Puto for our dessert and midnight snack hehe 😀 Josh arrived after dinner (ooops sorry hehe) and the four of us went to the Lingayen Capitol Area to just stroll around. I simply love the Lingayen Park at night – the music (you rock!), the chillax ambiance, the trees, the beautiful provincial capitol and the lingayen beach! Although the beach part is literally dark at night (no lights so night swimming is discouraged), it is not an excuse not to sit on the sand and think. Just like what James said, the texture of the sand in Lingayen Beach is quite similar to Boracay. The only difference is that it is gray. He also mentioned that Lingayen Park is one of the best public parks he has ever been to in the Philippines. Alex also loved the relaxed ambiance and Josh? I think this is one of his favorite spots in Pangasinan. He even sent out some postcards featuring the Pangasinan Provincial Capitol early this year 😀

The four of us stayed in the capitol area for almost two hours. I’m glad that our home for the night is just walking distance from the main area. We went back to the hotel and finally met Dr. Marco Duque. We weren’t able to take a picture with him though 🙁 While Alex opted to do some online tasks first before sleeping, I jumped to the bed immediately to get my much-deserved sleep. We woke up at around 7:30AM – just in time for breakfast! James went out early to do some running along the capitol area (no pollution! LOL) and Josh prepares as he needs to report at work that morning. The four of us had breakfast together.

James and Alex went to the Capitol area to take more pictures and finally swim at the Lingayen Beach while I stayed at the room for a lazy morning ritual LOL. At 10AM, I went to the beach area to say hello to the first-timers hehe 😛 To beat the heat, I scouted the area for Halo-Halo. Thank God I found one for Php15 hehe 😛 I also passed by the ICT event and met up with my dear friend Hannah. Too bad I wasn’t able to say hi to some of the speakers and participants. We took some pictures within the vicinity first before leaving The President Hotel: * E-mail and FB information to be posted soon.