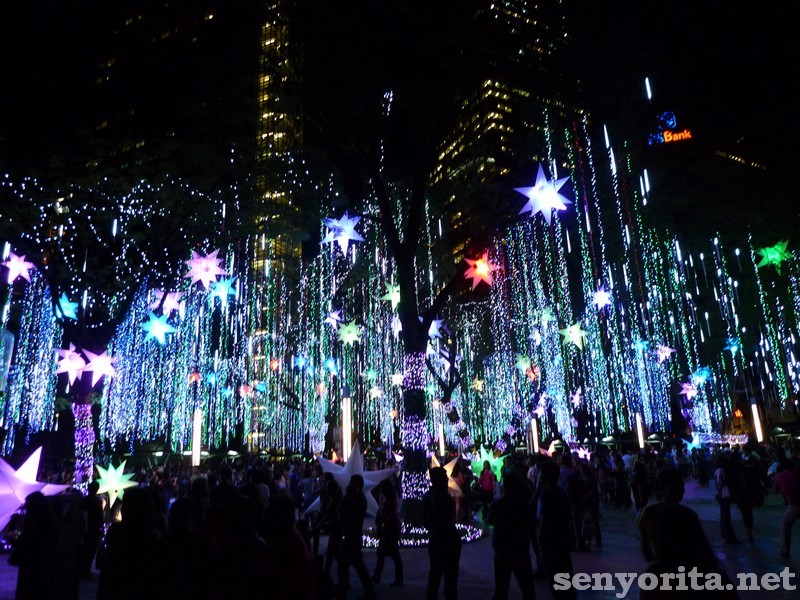 I am one of those employees who would pass through Greenbelt, Landmark and Glorietta in Makati not to shop, but to kill time or rush for the MRT travel schedule. That was three years ago. Whew! Â I seldom visit Makati Â nowadays not unless there’s an important meeting or event.

Yesterday, Eric of Byahilo.com informed me that he’s in Manila for a meeting somewhere in Taguig. He asked me if I would like to meet up. I just figured out that it is a perfect opportunity to visit the much talked about Ayala Triangle Gardens, a new in-demand hangout place in Makati and eventually catch the Christmas Light Show at night. The post of Darwin in TrackingTreasure.net is just too inviting! When he agreed, I immediately dressed up and gumorabels!

I’m just glad that Ayala Triangle Gardens is just a few minutes walk from Greenbelt. I remember that Byahilo and I met up at the Philippine Stock Exchange early last year for a travel trip. It’s our first time to do some lamyerda within this area of Makati. Sosyal lang ang magyaya eh! We love to eat and since we’re hungry from traveling (parang nag-MRT at naglakad lang ah?), we went to Wee Nam Kee for some Singapore Hainanese Chicken. Kunwari nasa Singapore kami. Mayaman kami today! Charot. Now I know that Eric is a Ginger Monster!

Since the weather is making us sleepy but we don’t want to leave yet, we went to the nearest Coffee Bean and Tea Leaf branch. It was only then I saw their 2012 Planner. I want one! This looks better and more organized compared to the other coffee planners up for grabs this year.

At around 7PM, the Ayala Triangle Gardens became crowded mostly composed of families and office yuppies. Almost all the restaurants were fully booked and the kids can’t help but smile with the Christmas Light show called “Symphony of Lights”. My relatives went here a couple of weeks ago to witness it and I got curious.

All I can say is this is a nice breather for the Makati workforce. It is a place where you will feel the spirit of Christmas no matter how old you are. Lucky that I was able to record some of the highlights. Iba pa rin ang pasko ng Pinas! (Video will be uploaded and embedded here later).

We ate dinner at the nearest ChicBoy branch then went back to Ayala Triangle to witness the show again. Most of the people present were in awe. You will see the eyes of the kids and parents glowing as they watch this fun-filled show. There were sweet couples too who were hugging each other underneath the Christmas lights and the glowing giant stars. How lovely! Right after witnessing the last show for the night, Yaya and I thanked each other. We’ve been travel buddies for almost three years now and we’re just thankful that we get to do what we really want to do and that is traveling. Before, we were always in Makati to work. Now, we’re here to travel. Tuloy-tuloy ang lamyerda ng magyaya sa 2012!

Take a break from your usual Metro Manila routine! When in Makati, drop by Ayala Triangle Garden and catch the Symphony of Lights, a Christmas and Lights Show from 6pm to 9pm. You’d get to enjoy this spectacular show for FREE! There’s a number of food establishments around too!