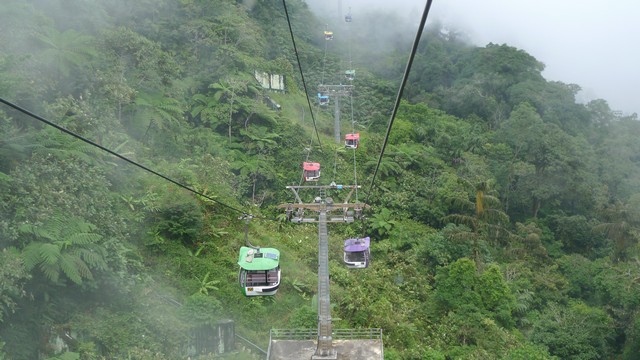 Two days prior to my arrival in Kuala Lumpur, Edward asked me if I have some destinations in mind that I would love to visit for the weekend. I had no definite itinerary and I just took some suggestions from travel blogger friends. Jerome suggested that I must visit Genting Highlands and Batu Caves. I relayed the message to my dear friend Edward and he bought us tickets the next morning. How sweet =)

Sleeping for only four hours, I woke up at 8 morning to catch the shuttle bus of Resorts World Genting at the KL Sentral. Since the sun is up and the i assumed that the weather is as humid as what we have in the Philippines, I decided to wear shorts. Edward’s housemate asked me if i am sure with my outfit. I said yes since it is an outdoor theme park and I can tolerate the indoor coldness just in case.

So we went to KL Sentral to take the shuttle bus to Genting Highlands. I noticed that just like in the United Kingdom, Malaysia adapted the scheduled transpo time unlike here in the Philippines where you can ride a bus whenever you want to. We were able to take a good seat and I enjoyed the scenery as we go to our destination.

I am quite impressed with Kuala Lumpur’s highways and when you say U Turn, the ride will really do a 360 degree turn LOL. Oh, i feel dizzy like tipsy hehe 😛

After 40 minutes or so, we arrived at the destination. Wow, it’s freakin’ cold, but i’m excited to ride in the Genting Highlands Skyway. If i remember it right, my last cable car experience was way back in 1994 in Hongkong with my parents. Fun times.

‘So, how long will this ride take? Five minutes?’ I asked Edward.

OMG LOL. I then found out that the Genting Highlands Skyway is the longest cable car service in Southeast Asia! It is also considered as one of the fastest in the world. Nice.

There’s also a Korean couple who rode with us and even if i don’t really understand what they’re saying, it seems like they were really impressed with the foggy scenery.

I started to shiver. I’m glad i brought my scarf with me but it isn’t enough since it’s a thin one 0_0. I recorded a funny video of me worried about the fog. I am officially dependent to Edward on this trip and imagine the relief when he mentioned that there are clothes for sale within the area. Whew!

We’re here! Tourists of different walks of life and nationalities are roaming around. We then looked for a place where we can eat brunch.