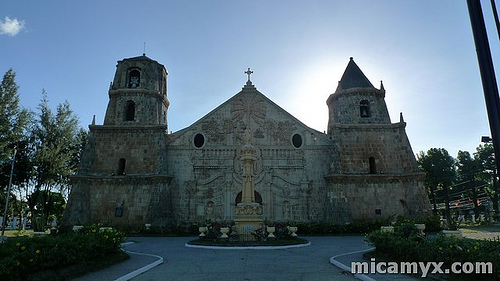 When the organizers of the Visayas Blogging Summit announced the final date of the event, i immediately booked a round trip ticket to Iloilo. I even managed to get my own discounted roundtip ticket due to the seat sale. Unfortunately, I had to move my trip to a later date because of another trip that is hard to turn down. I could have cancelled the whole trip, but I realized that it is also a perfect time for me to explore Iloilo and yes, go to Guimaras!

Together with Ada, we were able to explore some parts of Iloilo on our own!

I arrived in Iloilo a night before Ada did. We stayed in One Lourdes Dormitel as suggested by the organizers of VBS (sorry if we missed it! :|). One Lourdes Dormitel is perfect for travelers who is craving for a decent place to sleep and rest. Also, Ate Ria stayed there for a few nights and i slept at her room on my first night in the city.

When Ada arrived, we figured out that we should try their Batchoy. Going to La Paz Market to try the real La Paz Batchoy was in the plan, but we ended up eating in Ted’s Batchoy SM Iloilo branch. No regrets though because it really tastes good!

Since we missed the Iloilo Heritage Tour organized by the Visayas Bloggers, we decided to just list down some of the places indicated in their itinerary and asked around on how we can go to Miag-ao Church, San Joaquin Church and San Joaquin Cemetery.

We rode a jeepney going to Miagao. The Ilonggos who were also in the same jeepney gladly answered our questions about the way to Miag-ao Church. It took us almost an hour to go to one of UNESCO’s World Heritage Sites.

When we got down from the jeepney, we were just amazed with the outer structure of the church. The Miag-ao Church was built in 1786 by Spanish Augustinian Missionaries. You can see some carvings inspired from the Spanish era.

I also learned that the Miag-ao Church and the watchtower defended the place from the Moros. I am glad that they were able to preserve Miag-ao Church’s beauty. It is also a living testimony of the place’s history.

Our next destination is the San Joaquin Church, which is 15 minutes away from Miag-ao Church. It was already 4pm when we arrived and there were lots of students near the plaza. It didn’t stop me and Ada from taking some pictures since we liked the right side of the church:

Although we were partly scared already (it’s our first time in the place LOL), we still managed to visit the San Joaquin Cemetery as our last stop.

Hey, this is not an ordinary cemetery. I can describe it as a place wherein one would be tempted to take a pre-nuptial pictorial no matter how weird that sounds like 😛 The bloggers who went a day before we did were saying good things about it.

The San Joaquin Cemetery is the oldest preserved place in the entire Iloilo province. The stairs towards the “Campo Santo” is made of stones which was used in most constructions during the Spanish Era. As usual, Ada and I took some pictures:

We waited for a few minutes before we were able to take a jeepney ride back to Iloilo City. That was a tiring yet fulfilling day on our part. DIY Iloilo Heritage Tour ftw! 😛

For more information about Iloilo, check out Explore Iloilo.