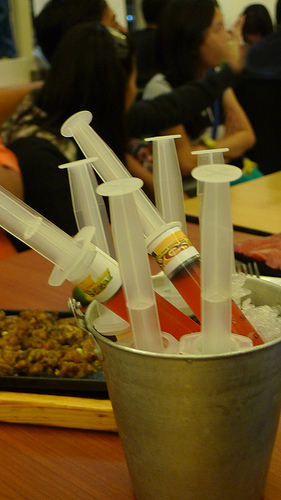 I met Donna Mae Congson during the Davao Food Appreciation Tour (DFAT) last April 2010. I can described her as little kikay girl trapped in a woman’s body. She’s bubbly and fun to be with. When I found out that she actually owns a number of salons and restaurants in Davao and Gen San, I was impressed. I never thought that this lady is serious when it comes to business matters!

On our trip to General Santos, we finally had the chance to check out Piyesta KTV and RestoBar in Alfresco Strip, Robinson’s Place General Santos City. It is owned by Donna and her family. I’ve read a number of blog post about the sashimi and jell-o shots that they have. We went there to meet up with the rest of the SOCCSKARGEN Bloggers.

Donna surprised Sarah with a Sashimi Party when we arrived. We sang a happy birthday song and started eating Sashimi (even if we just finished our heavy dinner in another resto).

While chatting with other bloggers, the popular Syringe Jell-o Shots. I saw it in Byahilo and Libotero’s blog and they mentioned that this caught their attention when they went there a month before us. I am not really a drinker, but I have to admit that I loved the taste of this one. We were able to take the syringe as a remembrance LOL 😛

There are KTV rooms where groups and sing and bond together. Unfortunately, we weren’t able to check and use them because the rooms were occupied that night. The nice thing here is the place is actually jampacked that night compared to the other establishments.

I might go back there this October and hopefully, I’d be able to sing there and take more jell-o shots 😛

Before I end this post of mine, I would like to inform you all that there will be a Sashimi Night on Friday, September 25, 2010 at Al Fresco Strip, Robinson’s Place General Santos where Piyesta KTV and RestoBar is one of the participants. For more details, kindly check here.