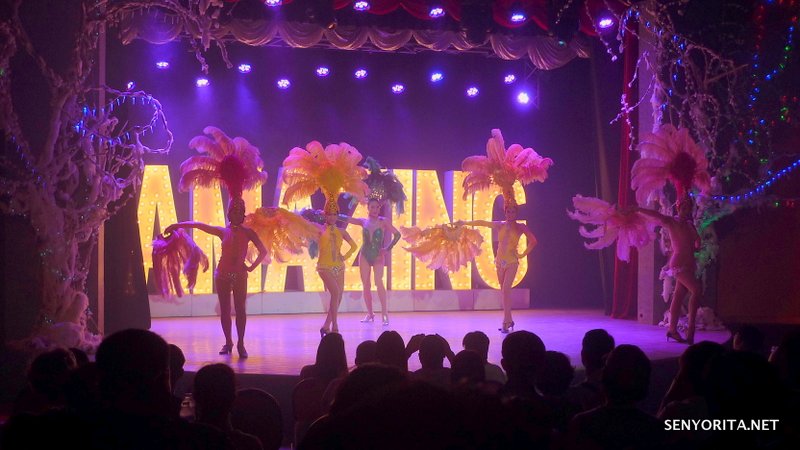 I LOVE DRAG QUEENS. Thanks to Mama RuPaul, the show Rupaul’s Drag Race gave drag queens in America an outlet where they can showcase their talents, earn big bucks and lots of admiration from fans worldwide. Did you know that five Pinay Drag Queens made it on the show? All of them stood out in their own unique way. Werk!

While watching Manila Luzon or Phi Phi O’Hara live onstage is far from reality as I write this entry, I can say that the Boracay Amazing Show somewhat satisfied my lust for drag queen shows!

We met Badet, one of the regular performers of the Boracay Amazing Show when Brenna and I watched the fire dancers of Sandbar perform on Friday night. When I first saw her, I was just stunned â€“ she’s so pretty! She honestly reminds me of TV5’s Ritz Azul. She invited us to watch the performance on Saturday. Why turn down a fabulous invitation? Gorabels na!

Brenna and I rushed back to Station 2 from Diniwid Beach to make it on time. Sakto!

AMAZEBALLS! Five lady boys who were prettier than us stepped onstage. I love it!

The Amazing Show had successful runs in Manila and Cebu. The All-Male group had been performing in Boracay for a year â€“ and still werkin’ it!

What I noticed during the show is that almost 80% of the guests are Koreans. Apparently, the Amazing Show is already included in package tours. Korean dishes were served in some tables. The Amazing Show doesn’t only showcase beautiful faces and glamorous outfits. The variety of performances makes it worth watching. There’s the presentation of Filipino Traditional Dances as well as special numbers catering to neighboring Asian countries such as China, Japan and Korea.

Not only that! These glamazons also have musical-inspired presentations like Dream Girls, Moulin Rouge, Cabaret, Phantom of the Opera and more!

Of course, that PSY hit Gentleman.

If you’re thinking the Amazing Show will feature very naughty segments, you are wrong. It is a family-friendly show. There were instances wherein the performers would tease audience members, but in a decent manner. Some kids were asked to participate too!

The Boracay Amazing Show truly lives up to its name. It takes a lot of preparation and self-discipline in order to perform six nights a week with the fast sequences and costume changes.

When having a photo taken with the performers, a tip is expected so bring extra money. It’s just like watching a drag show in West Hollywood they’re werqin it so they deserve some love and moolah, baby!

Have you seen the ladyboys of Boracay Amazing Show perform live? I apologize for the low quality of pictures. Ciao!