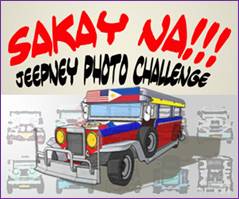 The U.S. Embassy in Manila invites everyone to take part in our photo contest, theÂ Sakay Na!Â Jeepney Photo Challenge.Â  We invite the public to submit their best original photos featuring Philippine Jeepneys to compete for a chance to win prizes.

â€œWe see the Jeepney as a symbol of U.S.-Philippine friendship,â€ said U.S. Embassy Public Affairs Officer Robin Diallo.Â  â€œThe earliest Jeepneys were constructed from jeeps brought to the Philippines by the United States during World War II, but since that time, they have evolved in beautiful and creative ways.â€

Jeepneys express the unique culture of the various regions of the Philippines, as they differ in style and design from place to place.Â  Given the historical connection of the Jeepney to the United States, the U.S. Embassy is launching theÂ Sakay Na!photo contest to celebrate this unique andÂ  colorful cultural icon.

To enter the contest, visit the U.S. Embassy Manila Facebook page athttp://www.facebook.com/manila.usembassy, click on the â€œSakay Na!Â Jeepney Photo Challengeâ€ link, and follow the instructions.Â  The contest is open to anyone residing in the Philippines who is at least 13 years of age.Â  Deadline for submissions is Thursday, February 19.Â  We will be inviting the public to vote via Facebook for the top three entries during the voting period from February 20 to February 25. Join us in celebrating the Jeepney, and send us your photos from around the Philippines!

NOTE: This is a Press Release.